The global stock market rebound eased on Thursday, as traders questioned the sustainability of highflying stock valuations. US futures, including for the Dow, S&P, NASDAQ and Russell 2000, receded from the early highs that followed yesterday’s biggest Wall Street gain in months.

Still, markets remain volatile and investors will be closely watching for any indication that further selling may be in the cards, especially ahead of today’s ECB policy decision and US weekly initial jobless claims data.

S&P 500 futures may be completing a falling flag, bullish after the preceding rally, which broke out of the falling channel.

Note, however, the contract is still below the long-term rising trendline.

Like US futures, STOXX Europe 600 gave up a second day’s advance—as investors go back and forth about whether there will be more stimulus from the ECB amid a strengthened euro.

The single currency gained for a second day, as traders speculated that the European central bank will leave its policy unchanged when it meets today and that it is powerless to stand against the Fed’s efforts to weaken the dollar.

The ECB is expected to only marginally update economic projections for output and inflation that demonstrate the increased uncertainty of a recovery, even as the bank underscores that some of the most severe economic risks have not come to pass. It is understood that some ECB members have become more confident that there is no need for additional stimulus, and if this view gains a majority we can expect the euro to soar.

The Financial Times reported that ECB President, Christine Lagarde’s statement, which follows the rate decision, may include a sentence about the EUR/USD exchange rate, but it did not give any other details.

Asia was mixed but still snapped its longest losing streak since February. It was another day in which Chinese shares bucked the trend, falling both on the mainland and in Hong Kong after regulators moved to curb speculation.

The South Korean won fell against the dollar, but the overall pattern suggests the won will resume its ascent since the Mar. 19 lows, or as shown in the reverse, below, with the dollar as the base currency.

The USD/KRW is developing a second continuation pattern smack on the uptrend line since April 2018, with the 50 DMA pressing from above, right after crossing below the 200 DMA, triggering the dreaded Death Cross.

Yields, including for the 10-year Treasury, fell again, possibly forming the right shoulder of a H&S top.

The dollar slipped for the second day, after reaching the top of the falling channel—reinforced by the 50 DMA—in place since the May high met with the trend line, tracing the highs since July 28.

The odds for the USD are, however, for a continued downtrend, but a break above the highs since July may signal a reversal.

Gold was little changed as it works on a pattern to give it the oomph to spring higher.

The precious metal is developing a second consecutive bullish flag, within a rising channel, that is aiming to break the topside of a pennant (red) on the daily chart. This would occur after the first flag gave it the momentum required to bottom out—which would signal a resumption of the long-term rising channel since the March bottom.

Bitcoin threatened to blow out a bearish pattern.

The cryptocurrency had already completed a daily H&S pattern, which fulfilled its target.

Oil trimmed yesterday’s 3.5% gain, the biggest since June 5, when the commodity notched a 5.7% close.

From a technical perspective, the price completed a rising wedge, bearish after the climactic rally from the sub $40s to the positive $40s. 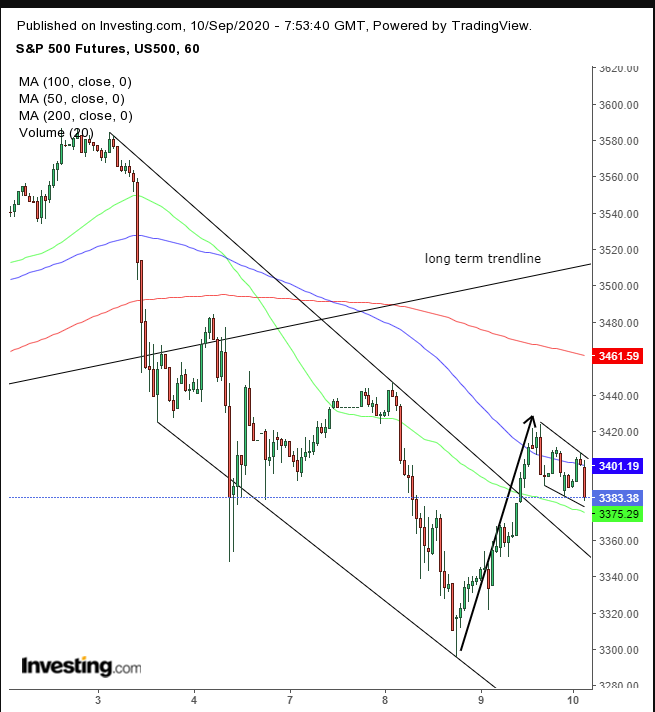 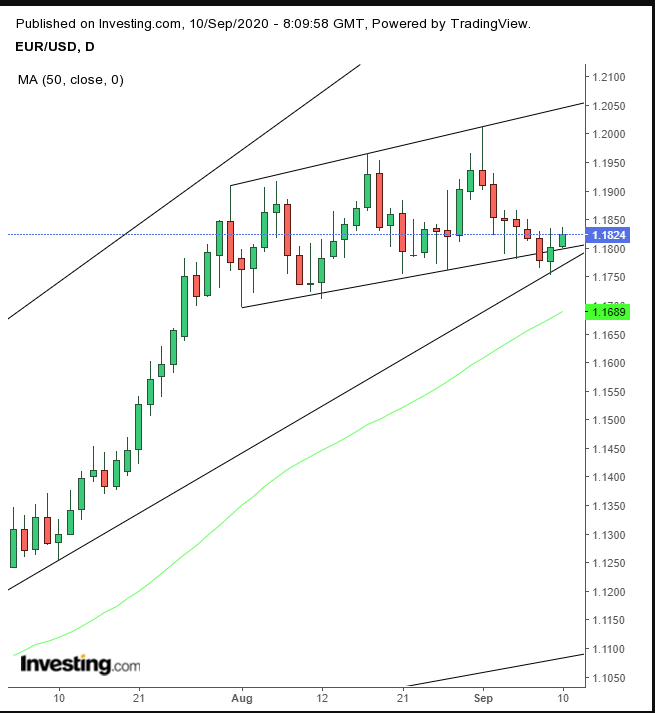 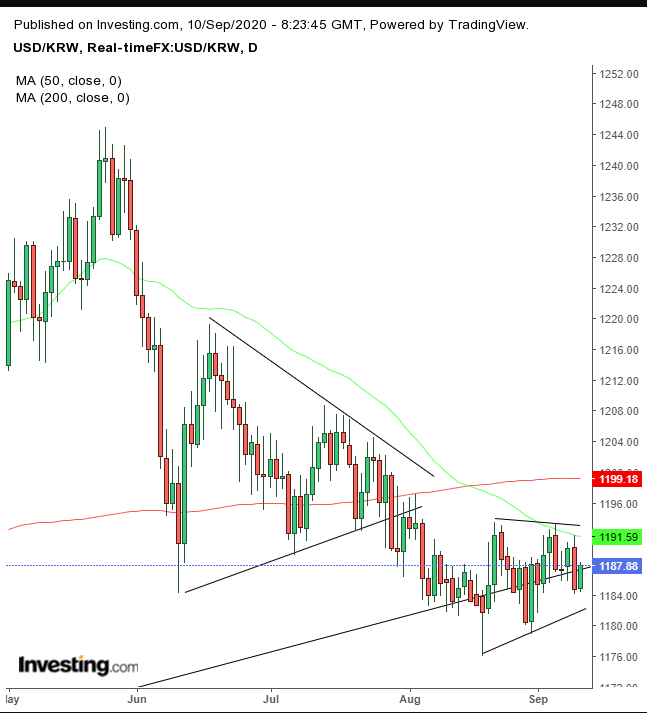 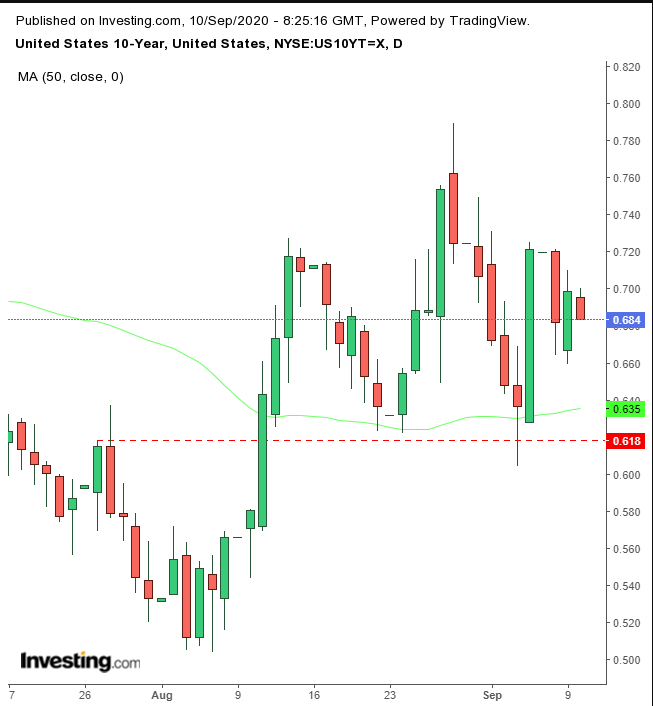 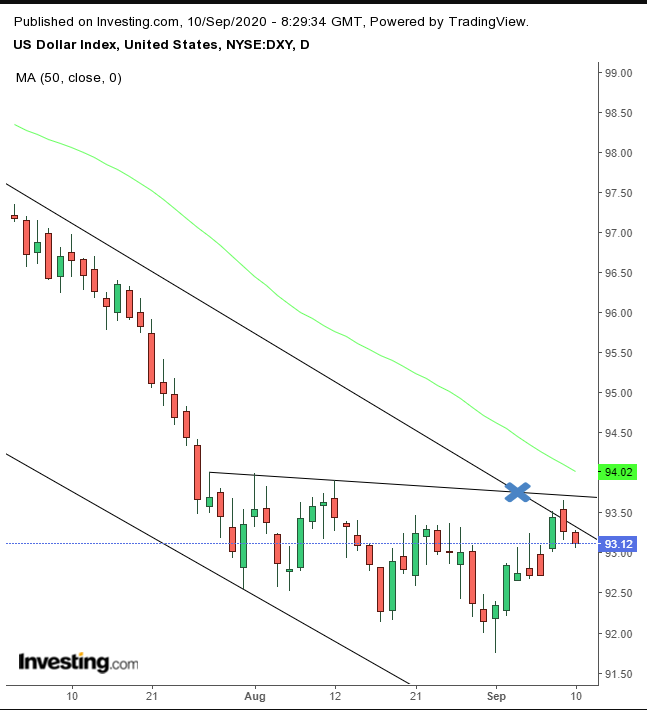 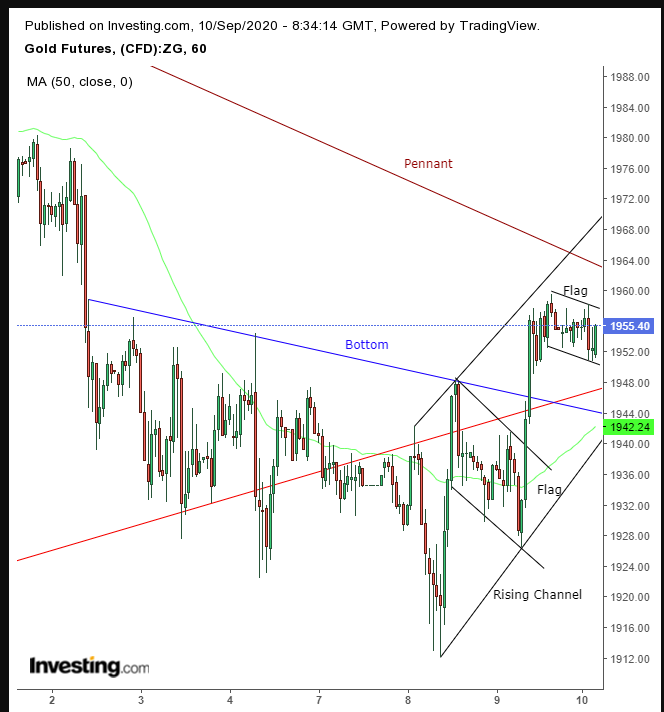 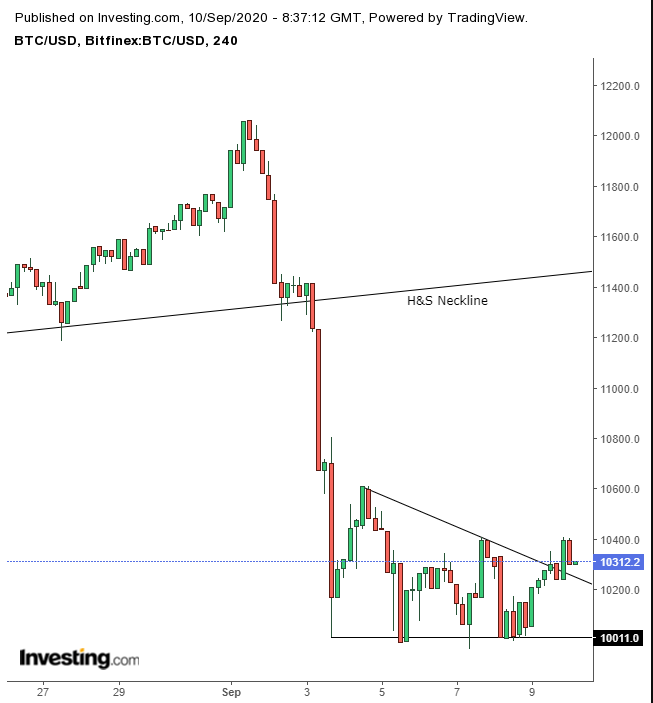 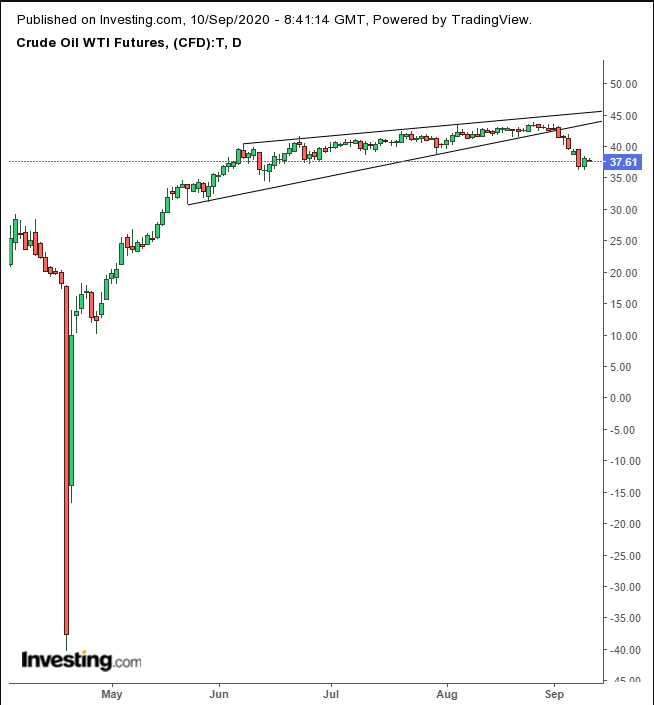