In a major boost to Prime Minister Narendra Modi’s ‘Make in India’ initiative, Apple has started assembling one of its flagship devices, the iPhone 11, at the country’s Foxconn plant in the northern city of Chennai. 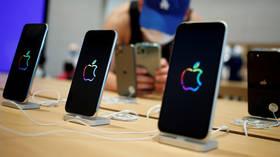 Commerce Minister Piyush Goyal announced the news on Twitter on Friday, writing, “Significant boost to Make in India! Apple has started manufacturing iPhone 11 in India, bringing a top-of-the-line model for the first time in the country.”

According to TechCrunch sources, a small batch of locally manufactured iPhone 11 units has already shipped to retail stores, but the production yield is currently limited. Apple has ambitions to scale up its production efforts in India, the sources said. It also plans to make the iPhone SE 2020 in India at its Wistron plant near Bangalore.

The US tech giant is reportedly exploring ways to cut its reliance on China, which produces the vast majority of iPhone models today, and to focus on the world’s second largest smartphone market, India.

Apple has been seeking ways to ramp up production in India for years, but the company has struggled to find contract manufacturers that adhered to its safety and quality standards, people familiar with the matter said.