While millions of jobs are projected to be lost this year as a result of the coronavirus crisis, tech moguls have seen their fortunes skyrocket. They are getting richer even faster as the pandemic drives more activity online. 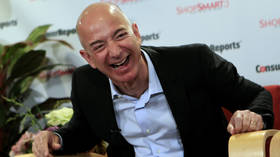 The collective wealth of tech billionaires in Bloomberg’s index (a ranking of the world’s 500 richest people) has nearly doubled since 2016, from $751 billion to $1.4 trillion today. That is a faster rate than in every other sector.

Seven of the world’s 10 richest people are from the technology sector, with a combined net worth of $666 billion, up $147 billion this year. Of the top 10, only non-tech billionaires have lost money this year – luxury mogul Bernard Arnault and Berkshire Hathaway’s Warren Buffett.

Big winners so far include Elon Musk, whose net worth has more than doubled to $69.7 billion on the back of surging Tesla shares. The world’s richest man, Amazon’s founder Jeff Bezos, got richer by $63.6 billion, with his fortune having exceeded $200 billion. Another chief executive officer, Mark Zuckerberg of Facebook, enjoyed a net-worth surge of $9.1 billion.

“We moved the brick-and-mortar economy to an online economy dramatically,” a finance professor at the University of Chicago Booth School of Business, Luigi Zingales, told Bloomberg.

“Probably the same thing would have happened in a longer period of time. Now it’s happening in weeks instead of years,” he said.

Statistics show that five of the largest American tech companies (Apple, Amazon, Alphabet, Facebook, and Microsoft) have market valuations equivalent to about 30 percent of US gross domestic product. That’s almost double what these were at the end of 2018.