The world’s most popular cryptocurrency, bitcoin, passed its key resistance level on Monday, jumping above $10,000 per coin for the first time since early June. 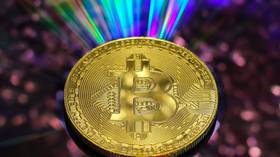 The digital currency was trading at $10,273.41 as of 12:30pm GMT, which is over three percent higher than 24 hours ago, according to Coindesk. It last crossed the $10,000 price level on June 3 and has since seen a steady decline. However, over the past seven days, the virtual currency surged nearly 11 percent.

According to Vijay Ayyar, head of business development at cryptocurrency exchange Luno, large players are debating whether to sell off their bitcoin to smaller entrants in the market, which could push the price lower and make it more attractive for bigger traders to buy more of the digital asset.

“This doesn’t seem to have happened,” Ayyar told CNBC. “What we have unfolding is potentially re-accumulation by big players, joined by smaller traders in an attempt to push BTC higher past 10K and more past 10.5K, which is the big resistance level, where BTC last put in a high.

“We still haven’t broken the 10.5K level, if that happens, BTC is probably running to 15K. All signs point to that at this point,” he said. Ayyar explained that bitcoin could benefit from stimulus measures taken by countries as well as hopes for a coronavirus vaccine.

“My view is that with the major governments declaring unprecedented stimulus packages… we will see continued bullish momentum across markets. So that includes equities and gold as well. And BTC and crypto will follow in this regard. Added to the fact that a vaccine seems within reach as well now, no reason to be bearish near term,” he said.