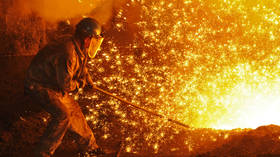 China produced 93.36 million tons of crude steel in July, or 3.05 million tons a day, which is over nine percent more than it did over the same period last year, Chinese media reported on Monday citing the China Iron and Steel Association (CISA). The figures coincide with data from the National Bureau of Statistics (NBS), released earlier this month.

According to the CISA, year-on-year production of pig iron rose 8.81 percent to 78.18 million tons last month, while rolled steel output was up 9.87 percent to 116.89 million tons.

China is the world’s top steel producer, but domestic consumption and exports dropped sharply at the beginning of the year as Covid-19 lockdowns paralyzed most industries. This resulted in huge losses for most manufacturers, including steelmakers. To offset the impact of the coronavirus outbreak, the Chinese government unveiled a massive stimulus package, including massive public infrastructure investment that eventually had a positive impact on steel production.

“As macro policies supporting growth consolidate economic recovery momentum, demand for steel in the downstream industry is expected to continue to grow,” the CISA said in a report.

China has become the first major economy to show signs of recovery and avoid recession amid the coronavirus pandemic. After the devastating first three months of the year, when the nation’s economy contracted by 6.8 percent, its gross domestic product (GDP) gained 3.2 percent in the second quarter.