Stephen Kenny’s side fell to a 3-2 loss in Belgrade.

IRELAND’S WORLD CUP qualifying campaign started with defeat in Belgrade, a see-saw game in which they snapped their goalless run but remain winless under Stephen Kenny.

The results under Kenny remain pretty much as bad as they could be, but this was yet another game to cram a few more caveats onto the bottom line: a patched-together Ireland took the lead and pulled a goal back from 3-1 down in the later stages, but ultimately they couldn’t resist gravity. Serbia won with Serie A star Sergej Milinkovic-Savic sitting on the bench and Luka Jovic – a man who cost Real Madrid almost as much as the FAI’s current debt – getting a late run-out for the sake of it.

This was a familiar parable of graft against craft and toil against talent; Ireland were brimming in the departments of the former but limited in the latter pair. Alan Browne gave them the lead midway through the first half but Serbia were level before the break, and then pulled away through two goals from substitute Aleksander Mitrovic.

James Collins prodded in from close range as Ireland rallied – two goals in a single game felt a mild extravagance given what has gone before – but were beaten by the side with better players.

Injuries and form left Stephen Kenny’s team selection a deeply mysterious thing, and the team-sheet screamed bold from the off: Shane Duffy and Jeff Hendrick dropped; Seamus Coleman restored for a first appearance since October 2019; Jayson Molumby and Josh Cullen forming an engine room with all of five collective caps; and, above all, a 5-3-2 with Matt Doherty and Coleman in the team for the first time.

There was some cavilling in the Irish press this week of the supposed free pass Kenny has been given from the “high priests of football analysis”, but, so it was told, on the twenty-fourth day of the eleventh month of The Kenny Reign – on that day all the springs of the great deep burst forth, the floodgates of the heavens were opened…and Ireland scored a goal.

Alan Browne began and finished the move: pouncing on a loose ball in midfield, he sliced an arcing pass to the left flank for Enda Stevens. Stevens then nudged the ball forward for Callum Robinson, who jinked his way into the box and then stood a cross up to the back post for Browne, who timed his leap perfectly to head beyond Dmitrovic.

For the goalless run, we can put a full stop at 678 minute, and the celebrations marked the first time Stephen Kenny has allowed uncomplicated joy write itself across his face.

Serbia then gave him plenty of reason to wrinkle those smiles with concern. 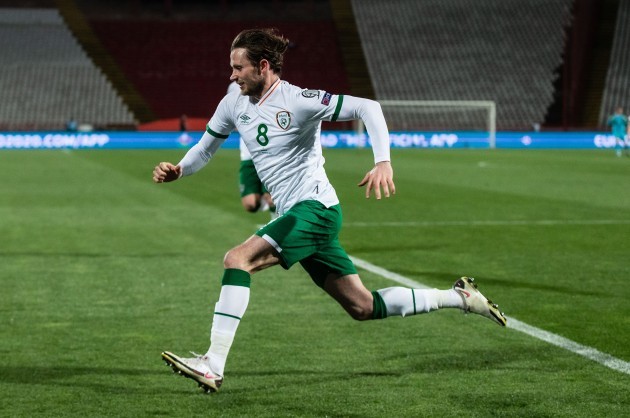 Ireland ceded ground and possession but remained largely untroubled as they held concentration in unison: Cullen diligently broke up play as Molumby hurtled into tackles; Seamus Coleman and Dara O’Shea compensated for Mark Travers’ hesitancy off his line by sweeping across the back three.

Six minutes before the break, however, Ireland’s focus lapsed and thus within seconds they lost their lead. Serbia punted the ball forward for the Dusan Tadic, who did his best Niall-Quinn-to-Robbie-Keane impression by flicking the ball on for Dusan Vlahovic to rifle the ball beyond Travers. Clark was caught half a step off Tadic and O’Shea the same off Vlahovic, but such are the narrow and threatening margins at this level.

Ireland looked jaded as soon as they conceded and they spent the last six minutes of the half looking in dire need of the whistle. Serbia, meanwhile, finally punctured a few holes in the Irish back five. Djuricic got in behind Matt Doherty and pulled a ball back for Vlahovic which was superbly blocked by Clark, while Travers was then forced to block a Djuricic effort as he scampered onto a fabulous Tadic through-ball. Travers was then exhaling in a mixture of pain and relief from the corner, as he collided with the post in panic after Tadic tried to curl a quick corner inside the post.

Stephen Kenny began the second half roaring, “C’mon, let’s keep the ball” as Ireland made a ragged start, but minutes later he was screaming for a penalty, as Aaron Connolly went down under a challenge in the penalty area. With no VAR in operation, Ireland’s penalty reprieve came later: Seamus Coleman somehow getting away with an accidental – but no less obvious – trip on Vlahovic as he slipped in the box.

It was, Opta stats revealed later, the first known bit of luck going Stephen Kenny’s way since records began. The game, however, then ultimately fell away from Ireland from there; undone by a level of quality they simply don’t possess.

Ireland pushed relatively high in the second half and knitted neat patterns that went unrewarded with a total lack of a penalty box presence: a fizzed Robinson cross for Connolly was cut out by a Serbian defender, while Connolly later missed an excellent Doherty cut-back entirely.

Serbia had no such problems, with the introduction of Aleksander Mitrovic allowing Tadic play centrally and slice Ireland to pieces. Shortly after Mitrovic entered the fray, Travers was the next to learn that, at this level, the opposition spot your mistakes before you do. Serbia played a quick ball around the corner to substitute Aleksander Mitrovic, who spotted Travers standing in Paddy Cullen territory off his line and lofted the ball over him.

Minutes later, Mitrovic killed the game: the outstanding Tadic dinked the ball into the area where the striker rose above Ciaran Clark and looped a header over Travers.

Kenny shook out his bench and brought on his experienced players, and their abiding tenacity gouged out a late Irish goal. Shane Long – after an Irish career of chasing hopeless causes – forced Stefan Mitrovic into a lame header, latched onto the loose ball, knocked the ball to James Collins who poked it over the line.

That was it, though. Ireland never threatened again, and Stephen Kenny’s Ireland reign remains a tale told with a, ‘Yes, but….’