While the coronavirus pandemic may become the last nail in the coffin of the US dollar’s status as the primary reserve currency, the seeds of its inevitable decline were sown long ago, a former Morgan Stanley economist believes. 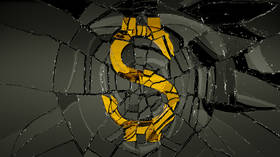 The greenback is set to decline due to a shortfall in domestic US savings and a massive budget deficit, according to Stephen Roach.

“The US economy has been afflicted with some significant macro imbalances for a long time, namely a very low domestic savings rate and a chronic current account deficit,” Roach, who is also a Yale University senior fellow, told CNBC.

Despite the current strength of the US dollar as investors seek safety, it is set to drop “very sharply,” losing up to 35 percent in value against the currencies of a broad basket of America’s trading partners. Roach had earlier warned that this will result in inflation and wider trade deficits, along with increased prices for US consumers. According to his forecast, this could happen in just a couple of years.

“At the same time, America is walking away from globalization and is focused on decoupling itself from the rest of the world,” Roach said. “That’s a lethal combination.”

In an earlier opinion piece for Bloomberg, Roach noted that the dollar’s share in official foreign-exchange reserves has declined by around 10 percent over two decades and this could further “gather momentum in the years ahead.”

He also believes that the weakening of the greenback is set to coincide with the rise of the euro and the yuan.

“With China and the eurozone accounting for 40 percent of US trade, I would be the first to concede that the math of a dollar crash won’t add up unless those two currencies rise significantly, as I expect,” he said.