It’s understood that Dublin is one of the cities being targeted by the company.

THE DUBLIN BUSINESSMAN behind the Wax Museum and the Button Factory is hoping to bring his latest attraction, the world’s tallest moving statue, to the capital.

Launched today and inspired by Jonathan Swift’s Gulliver’s Travels, ‘The Giant’ is a new visitor attraction developed by Paddy Dunning over 10 years.

Standing 10-storeys tall with a moveable head and arms, the Giant uses “a matrix of millions of programmable LED pixels” to allow it to take the form of famous people from history like Albert Einstein or characters like Spiderman, according to a statement released today.

“The Giant will transform itself into an exemplary man or woman and will also have the ability to speak or sing to the crowds that gather below,” according to the firm behind the project, The Giant Company Attractions Ltd.

“Between these dramatic appearances, visitors who have been scanned inside the exhibition space will be uploaded onto the giant statue resulting in the world’s most spectacular selfie. Visitors who are scanned can add audio messages to their Giant Selfies wishing friends and relatives birthday and anniversary greetings, offering marriage proposals and other salutations.” 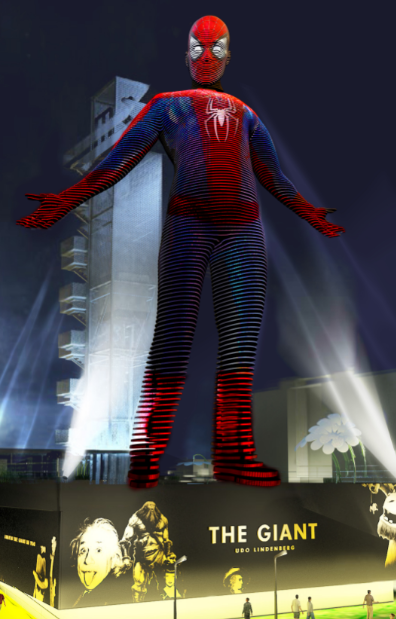 A mocked up image showing the statue ‘transforming’ into Spiderman.

Supported by Enterprise Ireland, The Giant Company has engaged estate agents CBRE to find identify sites for the statue around the world.

It aims to bring the patented concept to 21 cities around the world. It’s understood that Dublin is one of the cities being targeted.

Dunning says the Giant will be “an awe-inspiring” addition to these cities. His company estimates that it could attract up to 500,000 visitors every year, generating €12 million in revenue every year.

“The Giant will be one of the world’s most ambitious cultural and commercial projects bringing together art, amusement and wonder to create a contemporary and highly profitable business.

“We envision The Giant as an adjunct to new urban redevelopment projects, stadiums, arenas, shopping centres, museums and other locations.”

Each Giant will cost between €15 and €20m to develop, depending on location and size, according to the company.

“The Giant is a high potential start-up project we have supported from when it was at concept stage,” said Niall McEvoy, Manager, High Potential Start-Ups at Enterprise Ireland.
“At the core of this innovation is an ambitious team that has a vision for developing landmark attractions in multiple city locations across the globe. We look forward to supporting the next phase of the roll-out of this innovation.”