Markets in Europe and Asia fell on Friday after Beijing ordered the US government to shut down a diplomatic facility in Chengdu in retaliation to the US closure of the Chinese Consulate in Houston. 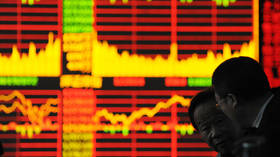 Chinese stocks led the losses in Asia, with the Shanghai Composite down more than three percent. Both the Shenzhen Composite and the Shenzhen Component Indices dropped over four percent. The selloff was also seen in Hong Kong, as the city’s Hang Seng Index tumbled over two percent.

Markets declined elsewhere in the Asia Pacific, with Australia’s All Ordinaries losing around one percent, while India’s key Mumbai Sensex and South Korea’s Kospi dropped around half a percent. Another key bourse in Asia, the Tokyo Stock Exchange, was closed for holidays on Friday.

Shares in Europe followed their Asian peers at Friday’s opening. The three main indices – France’s CAC 40, Germany’s DAX, and Britain’s FTSE 100 – all fell over one percent.

The selloff came amid escalating tensions between the world’s two biggest economies, the US and China. On Friday, the Chinese Foreign Ministry ordered the US Consulate in Chengdu to cease operations. Beijing said Washington provoked the move, as earlier this week it was told to vacate a diplomatic facility in Houston, Texas. US President Donald Trump warned that additional facilities could be shuttered.

Some analysts warned that rising tensions could further drive markets down at a time when the global economy is struggling with the coronavirus pandemic.

“US and China tensions escalating is the last straw to the market,” Alan Li, portfolio manager at Atta Capital, said as cited by the South China Morning Post.