Gold surged to record highs on Monday as growing tensions between the US and China fired up investor appetite for safe-haven assets. It was also helped by aggressive monetary easing across the world due to the pandemic. 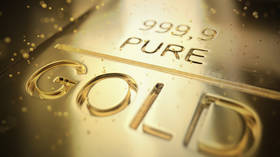 Meanwhile, the US dollar plunged to a near two-year low versus major currencies as concerns about the US economic outlook have also started to weigh on the greenback.

With the dollar substantially weaker, “a lot of funds are moving into gold right now,” analyst at ED&F Man Capital Markets Edward Meir told Reuters. “And as long as the [virus situation]gets worse, the market is discounting more stimulus for a longer period of time and in bigger quantities, and all of that is bullish for gold,” he said.

According to Jeffrey Halley, a senior market analyst at OANDA, gold’s record run may gain further momentum on technical buying and as stop losses are taken out. “The move to $2,000 an ounce will happen much more quickly than the move from $1,800-$1,920,” he said.

Global stocks lost steam late last week after Washington ordered China’s consulate in Houston to close, prompting Beijing to react in kind by shutting down the US consulate in Chengdu.

US Secretary of State Mike Pompeo said Washington and its allies must use “more creative and assertive ways” to press Beijing to change its ways.