New Delhi has started an investigation to determine if the imports of certain flat rolled aluminum products from China were undercutting domestic prices from fiscal year 2017 to December 2019. 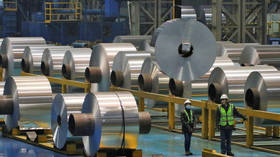 The decision is based on a complaint by India’s aluminum and copper manufacturing company Hindalco Industries which alleges damage to the domestic industry due to the dumped goods.

“The applicant has also claimed that imports are causing threat of material injury, considering significant increase in imports as compared to base year, significant surplus capacities in subject country, high export orientation of producers in subject country, and ability to scale up production in short span,” said India’s Directorate General of Trade Remedies (DGTR) as quoted by the Economic Times.

The alleged dumping has led to price suppression and depression on the domestic industry, DGTR said. In a separate notification, it recommended an anti-dumping duty on imports of Diketopyrrolo Pyrrole Pigment from China on the basis of a complaint filed by manufacturer Heubach Colour Private. The authority has recommended a duty of $1.31 per kg of the product which is used as a high-performance pigment in waterborne paints, enamels, epoxies and automotive and industrial paint applications.

The earlier anti-dumping duty was imposed on August 17, 2015 for five years on imports of the product from China and Switzerland.

India has been blocking imports of certain Chinese goods, including those re-routed from other countries. The tightening of regulations on imports from China followed a deadly clash in June between Indian and Chinese soldiers along a disputed border in the Himalayas in which 20 Indian soldiers were killed. New Delhi has since imposed 100 percent physical checks on shipments from China, which is its second-biggest trading partner. Trade turnover between the two countries was worth $87 billion in the fiscal year ending March 2019, with a trade deficit of $53.57 billion in China’s favor, the widest India has with any country.