International ratings agency S&P Global said it is expecting the Indian economy to shrink by nine percent in the fiscal year ending March 31, 2021. That’s larger than its previous estimate of a five percent contraction. 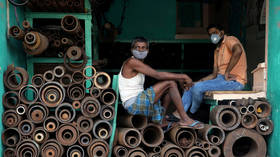 The forecast revision follows a 23.9 percent contraction of the Indian economy in April to June. Consumer spending, private investments, and exports crashed during one of the world’s strictest lockdowns.

“While India eased lockdowns in June, we believe the pandemic will continue to restrain economic activity…As long as the virus spread remains uncontained, consumers will be cautious in going out, and spending and firms will be under strain,” said S&P.

According to Vishrut Rana, Asia-Pacific economist for S&P Global Ratings, “The potential for further monetary support is curbed by India’s inflation worries.” The Reserve Bank of India (RBI) has cut policy rates by 115 basis points so far this year.

Retail inflation eased to 6.69 percent in August – it was 6.73 percent in July – but stayed well above the RBI’s six percent inflation target. The rate of inflation stood at 3.28 in August 2019.