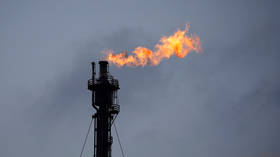 Shares in the Indian conglomerate, which mostly owns businesses engaged in energy and resources, as well as other spheres such as retail and telecoms, added over four percent at the end of the trading week. The recent gains boosted the company’s value to a record 14.15 trillion rupees, or over $189 billion – a mark that no Indian company has ever crossed.

This allowed Reliance Industries to overtake American corporation ExxonMobil, which faced losses on Friday. While its stock dropped less than one percent, it lost around $1 billion in market value, settling at less than $184 billion.

This puts the Indian business as the most valued energy company after Saudi Aramco – which is also the most valuable company on the planet with a market cap of more than $1.7 trillion, followed by Apple, Amazon, Microsoft, and Alphabet (Google). Reliance Industries is currently at 46th position among the world’s most valuable firms, and is ranked 10th largest among its peers in Asia.

While the energy business accounts for around 80 percent of Reliance’s revenue (as of the end of last fiscal year), the firm’s attractiveness for investors seems to stem from its digital and retail operations. Reliance Jio Platforms has recently attracted funds from Google and Facebook, with the two US tech giants alone having piled a total of more than $10 billion into it.

Thanks to soaring price of Reliance Industries shares, which rose 135 percent from a low in March, the company’s CEO Mukesh Ambani has recently become richer than Berkshire Hathaway chairman Warren Buffett and Microsoft CEO Steve Ballmer. The 63-year-old Indian tycoon is now the fifth-wealthiest person on the planet, according to Bloomberg Billionaires Index, with a net worth of $73.6 billion.