However, the outlook remains ‘uncertain’ and unemployment will remain high into 2022.

THE LENGTH OF the current lockdown period has slightly dampened the outlook for the Irish domestic economy, although a strong recovery is forecast for the second half of the year, according to the Central Bank.

Analysis of card payment transactions coupled with Central Statistics Office retail sales data suggest that “on aggregate, consumer spending is actually now essentially at or around pre-Covid levels”, said Mark Cassidy,  Director of Economics and Statistics at the Central Bank.

“While the economic outlook is highly uncertain,” the Central Bank said, its latest set of forecasts assume that Level 5 restrictions remain in place until at least the end of April before being gradually unwound.

In contrast with the ESRI and employers’ lobby group Ibec — both of which slightly downgraded their forecasts in recent days — the Central Bank of Ireland has pencilled in stronger-than-anticipated headline growth for 2021.

Although Level 5 public health restrictions have continued to “suppress economic activity” in the first quarter of 2021, the outlook for gross domestic product (GDP) and Irish exports have been upwardly revised in the bank’s latest Quarterly Economic Bulletin, published this morning.

Irish headline growth, measured by GDP, is now forecast to improve by almost 6% in 2021, an improvement of over 2% from the Central Bank’s last set of forecasts, published in January.

After helping to deliver GDP growth of 3.4% in 2020 — making Ireland the only eurozone economy to expand during the first pandemic year — Irish exports are projected to continue to “grow at a strong pace” this year as global economic conditions improve.

Led by the booming, multinational-dominated pharmaceuticals and IT sectors, exports are set to increase by a further 5% this year, up from the 3.5% anticipated by the Central Bank in January.

However, modified domestic demand — a measure of indigenous activity that strips out the distorting influence of multinational companies — is predicted to grow by just 2.8% this year after a precipitous 5.4% drop in 2020.

This represents a very slight downward revision of 0.1% from January due to the length of the ongoing public health measures and the phased nature of the reopening plan outlined yesterday.

“Nevertheless, on the assumption of a successful deployment of vaccines by the second half of the year, domestic demand remains well placed for a strong recovery,” the Central Bank said.

“The weaker prospects for domestic demand this year will be offset by better prospects for exports reflecting both a stronger outlook for world demand and continued strength in key exporting sectors.”

That recovery should pick up momentum in 2022, Cassidy explained.

On the flip side, the Central Bank expects unemployment to remain high well into 2022 and possibly beyond.

Its latest forecast suggests that the standard rate of unemployment will increase from 5.7% in 2020 to 6.6% this year as government supports such as the Pandemic Unemployment Payment are unwound later in the year.

The official unemployment rate is then expected to hit 8.1% of the total labour force in 2022.

“While government support schemes have enabled many firms to retain staff and remain operational, an eventual phasing out of these schemes may see a gradual rise in unemployment and an increased take-up of traditional supports such as the Live Register,” the Central Bank said.

A “gradual recovery” in labour market conditions is then expected for 2022.

However, “a slower rate of job matching due to return to education, worker retraining programs and difficulties in finding work due to prolonged periods of inactivity may mean a delay in employment reaching pre-pandemic levels until beyond the projection horizon”. 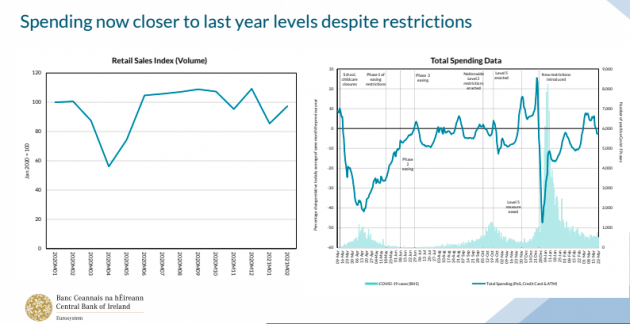 Buttressed by government income supports, consumers and businesses “have, to an extent, learned to adapt to the restrictions, for example, through more delivery services, takeaway options, online services, and other ways”.

However, “although relatively strong if seen against levels witnessed during the first lockdown”, consumer spending was still over 16% lower in January than the same month last year, according to the Central Bank’s latest commentary.

“Looking at the impact across different sectors, in terms of sales of goods, the hardest-hit sectors remain bars and clothing, while supermarkets and hardware, furniture and electrical goods have generally seen an increase in sales compared to pre-pandemic levels.”

Like the ESRI and Ibec, the Central Bank believes that the huge build-up of household savings over the past year could pave the path for a further uptick in consumer spending in the near future once restrictions have been relaxed.

Yesterday, new figures from the Central Bank showed that household deposits had hit a record high of €128 billion by the end of February, a year-on-year increase of 14% or roughly €15 billion. 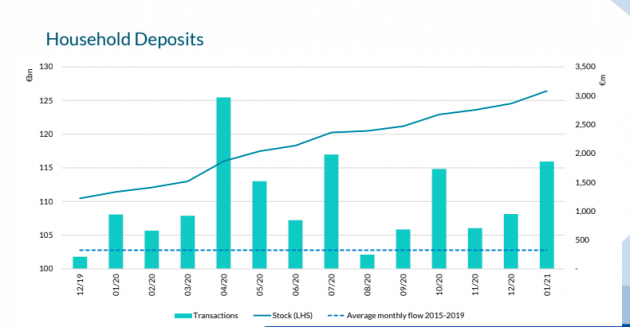 The Central Bank believes that around €10 billion of that is “excess savings, in other words, savings above and beyond what we would have expected in the absence of the pandemic,” Cassidy explained.

“Our estimate is that there may be around €5 billion available to be released into the economy to support consumption in the coming years. We don’t provide a timeframe for that. I think it may be more likely that that occurs during 2022 and beyond.”

For context, Cassidy said, consumer spending fell by about €9 billion last year. The €5 billion of unwound savings could help to make up just over half of that decline.