Those who held all the assets in 1971 became fabulously wealthy in America compared to those without assets, as the central bank began furiously printing money over the ensuing decades, say Max Keiser and Stacy Herbert. 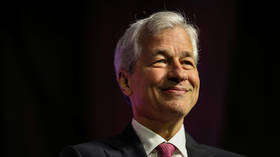 They take a look at a chart which shows growth in productivity and hourly compensation in the United States since 1948. According to the data, compensation stopped growing in 1971, while productivity continued to increase.

She adds that Federal Reserve chief Jay Powell prints money and gives it away to bankers like JP Morgan’s Jamie Dimon, who then has to decide who gets that money.