Longford footballer Darren Gallagher was in action with his club last night.

LONGFORD FOOTBALLER DARREN Gallagher is nursing a few aches and pains today that wouldn’t normally be there at this time of the year. 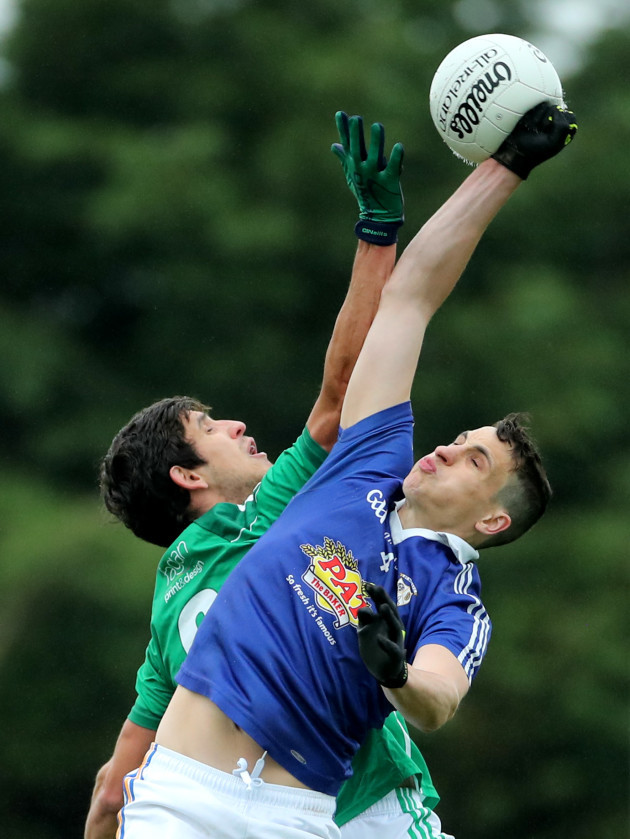 In ordinary time, a challenge match in June would come and go without much fuss for the midfielder. The body would be up to the pace of it.

But GAA players have spent the last few months in the wilderness with only closed gates to look at in pitches around the country. A total shutdown was required to help our country battle the spread of Covid-19.

The prospect of cancelling the 2020 season was almost a reality at one point before eventually giving way to the green light for a resumption.

In news that delighted fans around the country, the GAA opted to begin the reboot by playing club championships first, starting in July. The inter-county season will follow in October and will be rattled off by the end of December.

Gallagher returned to some non-contact training with his club Granard last week and played a challenge match against Mullingar Shamrocks last night, his first full run out since the curtain came down on GAA action in March.

“Plenty of aches today,” he told The42 about the physical toll of the game.

“Even the twisting and turning, and the intensity of it. Sure you were doing these 5km [runs]and it wasn’t really standing to you once you go into a match scenario.”

Club teams might be eligible to play games again, but the coronavirus hasn’t disappeared. Strict protocols are still in place to keep the curve low and the players had to follow some important steps before throw-in at Mullingar.

This was a game under Covid-19 conditions.

“We were told beforehand that there wasn’t going to be any facilities open which is fair enough,” Gallagher continues.

“So we came very much togged out, just had to change boots in the cars. It was no hassle, you were just happy to be getting out and playing a game and meeting the lads again.

“There wasn’t going to be any big tactical decisions made last night, it was just a matter of getting and blowing off the cobwebs. It was grand, shorter warm-up as well. There was no hanging around in the dressing-room before a game. It was nice just to get out and get playing.” 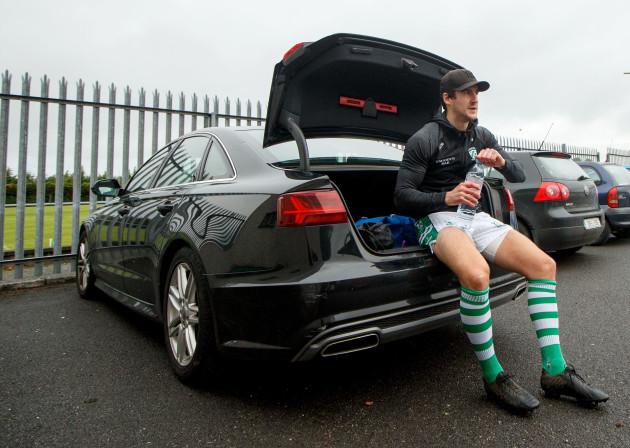 Players were instructed to get togged in their cars before the game.

The action from the game was all captured by Inpho sports photographer James Crombie. It was certainly an unusual time and place for him to be taking snaps. Midweek days during the summer months are normally used for recharging the batteries between weekends of hectic sporting action.

The experienced photographer knows the deal. He sacrificed his weekend freedom long ago. But Covid-19 rearranged his working schedule in 2020.

In the early phases of lockdown, Crombie became famous for a beautiful picture of a hurler fetching a ball while bathed in the moonlight.

The beautiful image even came up in conversation when he arrived in Mullingar for last night’s game. A former All-Ireland final referee even asked him if he was the one who was responsible for “that picture of the hurler.”

In the absence of live sport, his working life has been altered hugely by coronavirus. But when some sports connections informed him of the Mullingar Shamrocks v Granard game, he assembled his equipment and made his way to the pitch.

Aside from a few horse racing meets, this was his first live sport gig in three months. “It was bizarre covering a game in such a local ground but it was lovely as well because it was really grassroots,” Crombie begins.

“You’re chatting to the chairman at the gate and the PRO. It’s nice to have that because when you end up in the Olympics, everything is rules and regulations.

Sometimes it’s nice to just go back to grassroots. You had inter-county players there last night and it was nice to see them mixing with the club guys.

“I covered the Ballyhale Shamrocks training last week and you just see the joy of guys getting back and being among their friends.

“We’re blessed to have the GAA in Ireland.”

Gallagher is a Garda by trade and is stationed in Tullamore at the moment. He’s been serving on the frontline during lockdown, patrolling checkpoints and ensuring everyone’s safety while social restrictions were in place.

He’s happy to put the jersey back on for a uniquely short GAA season in 2020. It’s just nice to be back and see the old faces again.

But while the risk of contracting the virus is minimal, any risk at all may be too much for some players with elderly relatives or family members who are vulnerable to Covid-19.

Great to finally photograph a game after nearly 3 months, one of the first team sports game in Ireland since lockdown. Thanks to Mullingar Shamrocks and St Marys Granard pic.twitter.com/0CLTTp9KYP

“I can completely understand the decision and if any player makes a decision, they’re well within their right,” says Gallagher. “I suppose I’m in a lucky enough position, I don’t have too many worries around me. Things can change but at the minute, I’m just glad to be getting back into it.

But if lads don’t feel comfortable, they certainly shouldn’t feel forced to get back into playing. It’s everyone’s individual decision at the end of the day.”

Crombie has four children all under the age of 10. The days of social distancing has offered them a lot of family time together, while Crombie reckons he has “taken a picture every day since lockdown.”

Images from the provincial championships would normally populate the Inpho website at this time of year but for 2020, it will be the preserve of the club game.

Crombie is looking forward to visiting more club grounds during the coming months, and deepening his connection with the GAA at grassroots level.

“It’s going to give us a great opportunity to go to scenic venues with a nice mountain in the background.

“It’s going to give us a great opportunity to think about what we’re covering and try to cover something that’s newsworthy as well. It’ll give the club players a lot more exposure and it’s good for the public as well. I’m looking forward to being able to see my own club play which I never would.”

The club game is the focus for now in the GAA, while inter-county teams are not permitted to return to training until 14 September. There have been some anecdotal reports that teams may break this ban in order to get their preparations underway earlier, although the association has said it will not impose sanctions on teams who are guilty of this offense.

“You’re always going to have rumours and teams just wanting to do their own thing,” says Gallagher.

“I suppose from their own point of view, the last two league games are going to be played.

I can see where people are pushing for county to be given the green light to train a bit earlier but I think club should be given its due course at this stage of the year.

“We’ve been out for the last three months, I don’t see the point in rushing things back, just give clubs the chance to develop.”