James McClean scored Ireland’s goal in a 1-1 draw with the World Cup hosts.

THE REVOLUTION IS on hold: given the week he has had, Stephen Kenny will embrace our old friend the 1-1 with the sweet fondness and relief of the American housewife welcoming her husband home from Vietnam.

This might even have been the first win under the new manager, had Josh Cullen not seen his diving header in the final minute parried by Qatari goalkeeper Saad Alsheeb.

We have now ticked to 11 games without a win under Stephen Kenny, but such was the denuded belief of the build-up to this game, there is a victory of sorts in the fact this game not plunging the mood even further.

Ireland brimmed with energy in the first half of this game and took the lead through a clever set-piece and James McClean’s finish after five minutes, but they lost that lead a minute after the break, a second half in which their energy levels drained away.

Kenny stuck with a back three, but the set-up was more similar to a 3-4-3, with Horgan and Robbie Brady wide of Shane Long. Their pace gave Ireland an instant transfusion of energy, and Jeff Hendrick slid Shane Long behind the Qatari defence with a clever pass in the very first minute. Minutes later Ireland combined superbly again, Horgan chesting the ball off for Brady, who saw a volley deflected wide.

Moments later, a beaming Kenny was embracing his new coach Anthony Barry, who had just designed Ireland’s opening goal. Horgan rolled his corner short to Brady, collected the return pass and skidded a perfectly-weighted pass onto the penalty area where James McClean rifled the ball in, having looped around the onrushing Ireland attackers to shoot unmarked. 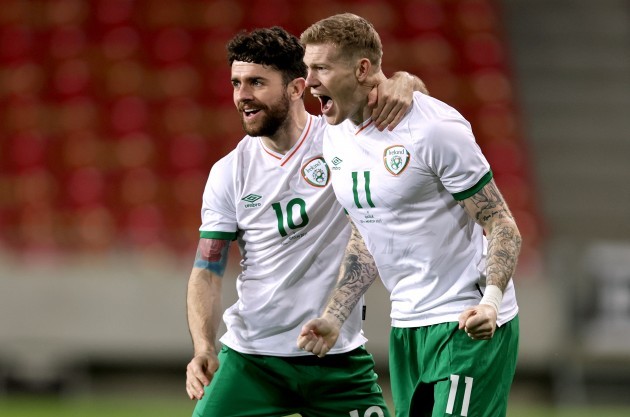 Brady pointed immediately to Barry in celebration, too: brought in as a replacement for Damien Duff, Barry’s day-job is on Thomas Tuchel’s staff at Stamford Bridge, where he has carved out a reputation as a set-piece specialist. Kenny is blanketed by dark clouds at the moment, but he can take some encouragement having found Barry and a silver lining from Duff’s abrupt departure.

It was a helter-skelter opening, and Qatar believed they had a penalty minutes later when Gavin Bazunu rushed off his line and was deemed to have cleaned out Pedro Miguel. The foul, though, was well outside of the area, and the referee overturned his decision.

“Burst lines!” was Keith Andrews’ demand of Robbie Brady from the touchline, and Ireland poured many more numbers forward than they had in their Saturday night torpor. Cyrus Christie pressed high at right wing-back to force a poor back-pass, which Shane Long anticipated but saw a first-time shot saved by the goalkeeper.

Ireland showed far more vim and vigour in the first half, though they had lost their lead within a minute of the second. Almoez Ali ran at the Irish back line, and poked a ball through for Mohamed Muntari who, having pulled off the back of Shane Duffy, fired the ball into Bazunu’s bottom corner.

Kenny made a double change 10 minutes later, taking off Horgan and Long for Callum Robinson and Jason Knight, both of whom went wide of central striker Troy Parrott, who was a first-half replacement for the injured Brady.

It did little, taking away Ireland’s pace behind the Qatari defence, and their play largely congealed into the zestless dirge we saw for much of Saturday night. Qatar offered little, either, and while the RTÉ broadcast stalled midway through the second half, the Sky Sports viewers might feel they saw just about as enough.

In what was just about the only interesting thing to happen up until the closing minutes, Kenny’s assistant coach Keith Andrews got booked by the referee. Robinson had a chance to score as Qatari goalkeeper Saad Alsheeb flapped at a cross. The ball at his feet at the back post, he screwed a poor shot wide.

Cullen had the chance to finally snaffle that win for Kenny, but ultimately, it was the familiar Irish tale of a 1-1. Once the result we were trying to build on, Kenny and his squad will cling to it as succour after a hideous week.