London’s Gatwick Airport expects it may take four years for flight demand to recover, as the Covid-19 pandemic has severely crippled passenger flows and airlines are pulling their fleets out of the city’s second-largest air hub. 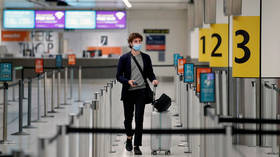 “We think it will take three to four years for Gatwick to come back to 2019 passenger volume levels,” Gatwick’s Chief Executive Officer Stewart Wingate told CNBC on Monday.

The Covid-19 outbreak has hit the aviation industry hard, with most countries closing borders and imposing travel restrictions to stop the spread of the disease. As a result of the pandemic, Gatwick has experienced “a dramatic decline in passenger numbers,” with flight movements dropping from several hundred a day to just a handful of departures. In the nine months leading to the end of 2019, just under 37 million passengers passed through the airport.

As air carriers also try to cope with the impact of coronavirus by implementing cost-cutting measures, some of Gatwick’s biggest customers have threatened to quit the airport. British Airways has already made heavy cuts to its operation at the hub and reportedly warned that it could pull out of Gatwick altogether. Another struggling airline, Virgin Atlantic, announced its plans to leave the airport last month.

“We are very hopeful that British Airways will continue flying. We think they will, we certainly are doing everything we can to persuade them to continue to fly to and from Gatwick; and Virgin (Atlantic) are holding on to their spots, so in three or four years, they are telling us, they certainly intend to come back to Gatwick,” the airport chief said.

Gatwick Airport’s biggest customer, budget airline easyJet, resumed flights from the North Terminal on Monday, alongside Wizz Air, Ryanair, Belavia, Vueling and Blue Island. EasyJet has not flown since the end of March.

Announcing the reopening, Wingate voiced dissatisfaction with the 14-day quarantine rule for all arriving passengers. He said the measure is already “having an impact on the start of air travel recovery,” calling on politicians to introduce country-by-country reviews.

The Gatwick boss is not alone in disagreeing with the quarantine policy. Last week, three major airlines – British Airways, easyJet and Ryanair – launched legal action against the UK government, calling the plan “flawed” and warning that it would have a “devastating effect” on tourism and the entire economy. According to some estimates, the two-week quarantine for those coming to the UK will cost the economy £650 million (nearly $815 million) a week.