The number of people in receipt of Covid-related payments is decreasing as more businesses start to reopen. 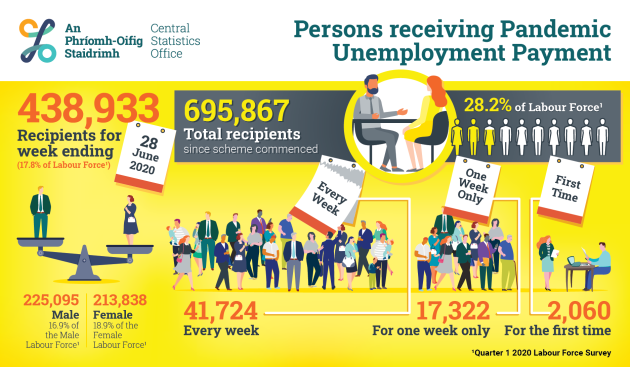 OVER ONE MILLION people received income support from the State in June, new figures from the Central Statistics Office (CSO) show.

A further 382,018 people were in receipt of the Temporary Wage Subsidy Scheme (TWSS) in June, down from 451,652 the previous month.

A total of 1,002,470 people were either on the Live Register or received the PUP or the TWSS last month.

The CSO noted that this number is not the total of the three schemes, as there is some overlap between them due to the different frequency of the payments, and the fact that some people who are included on the live register but not receiving a payment might be in receipt of of one of the other schemes.

Speaking about the findings, Catalina Gonzalez, a statistician at the CSO, noted that the emergency unemployment payments introduced in response to the Covid-19 pandemic are “not captured in the traditional methodology of the Live Register” as this relates to the number of claimants in receipt of Jobseeker’s Benefit or Jobseeker’s Assistance.

“Furthermore, Covid-19 payments are currently viewed as short-term in nature, with an expectation that those in receipt of such payments may return to work or may subsequently be considered for Jobseeker’s Benefit or Jobseeker’s Assistance.”