More than 1,000 Chinese students have had their visas revoked by the United States since June, after being accused of espionage for the Chinese military. 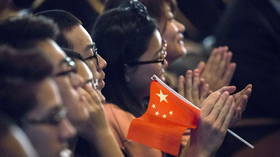 RT’s Boom Bust talks to Jeffrey Tucker from the American Institute for Economic Research who says that he “feels awful for these graduate students.”

They didn’t do anything, they had confidence in US educational system, he says, “and then the US government just decides to throw them out.” So, that deteriorates relations even further.

“This is really reaching peak, I guess, of China phobia; you know.” Tucker calls such measures “anti-American,” adding that they will only escalate the conflict between the two countries.