ROB KEARNEY HAS written a deeply personal message to the Leinster and Ireland fans on the back of his departure from the club.

He leaves some legacy. With Ireland he won four Six Nations titles and had a central role in the two wins over the All Blacks; while with Leinster he won four Heineken Cups, a Challenge Cup and six Pro14 titles over a 15-year period.

But at 34, age has caught up with him – which was why he got the pen out today, expressing his gratitude to fans, team mates and coaches in a heartfelt message.

“You always want one more as a player,” Kearney wrote on the Leinster website. “The next one becomes the most important. The next match, the next trophy, the next training session even. That is the process, that is the drive within us.

“It wasn’t to be, but I am so very grateful for every run out that I did get in a Leinster and an Ireland jersey.

“Losing to Saracens brought my time in a Leinster jersey and by extension an Irish jersey to an end.

I spoke to the players in the dressing room after the game and I spoke about living a dream because that is what I have done.

“I have lived the dream of every five-year-old boy or girl out there that dreams of pulling on a Leinster jersey, an Ireland jersey, a Lions jersey.

“You never get to write the script, but if I could, it would go as far as a packed RDS or Aviva in front of thousands of Leinster and Irish Rugby supporters where I would have had the opportunity to thank you all.

“The Leinster and Ireland supporters’ role in this journey has been special and running out in front of full stadia is what gives the greatest buzz and we have all missed that over the last few months and you appreciate it all the more now playing in empty arenas.”

At the start of his career, the arenas weren’t empty but they certainly were not full, either – as Leinster struggled to match Munster’s standards and had a reputation for falling short in big matches.

But Kearney’s arrival on the scene in 2005 coincided with the side beginning a gradual upward curve which culminated in their 2009 Heineken Cup win.

Kearney said: “I remember when we played away in Toulouse in the European quarter-final in 2006. Nobody gave us a chance but we came away with a win and played some unbelievable rugby along the way. It was the first time that I could sense the belief in the support as well. That trip home to Dublin and looking into the eyes of the supporters that had made the trip. Belief.

“That this club could become a mainstay of European rugby, a firepower to be reckoned with and you’ve stayed with us for every step since.

“For Ireland, the sea of green in Chicago and in Twickenham on St. Patrick’s Day for our Grand Slam decider are images that will be ingrained in me for life. 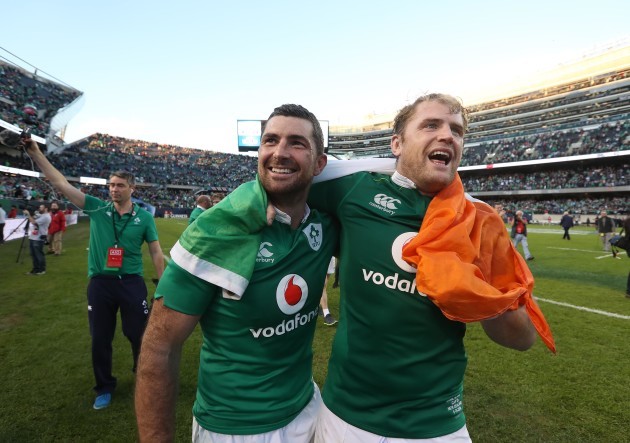 “To get to that point though you need good coaches, good doctors, S&C and physios, good players and teammates and I have been very fortunate to have been surrounded by them in Dundalk, in Clongowes Wood College, in UCD, and of course in Leinster and Ireland.

“Michael Cheika, who gave me my first Leinster cap and did so much for the club, Joe, Matt, Leo, and Stuart. Each in their own way contributing to the journey and to the stars on the jersey and the trophies back at UCD.

“I have also been very fortunate to have worked alongside some world-class strength and conditioning coaches and medics. They have helped me through some tough periods in my career and I am forever grateful to them.

“The medals and what you achieve are great but they are just by-products of good culture, good people, and a relentless drive to do better. And we had that in spades in the teams I played with in Leinster and with Ireland.”

Kearney also penned a nice tribute to his younger brother, Dave, who he shared glory with for province and country.

“So many memories of watching you playing a few years behind me and watching you progress and such an overwhelming sense of pride to see you selected for the Academy, then make your debut and putting on an Ireland shirt alongside me. You have made the last 11 years all the better for having you by my side every day and I’ll miss that the most.”