Some 396,000 tons of Russian liquefied natural gas (LNG) were exported to China in June, according to a Bloomberg report citing data from China’s General Administration of Customs. 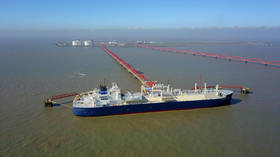 That figure reflects a 20.7 percent rise compared to May.

Statistics showed that US LNG exports to China amounted to 340,000 tons during the same period, slightly up by 2.4 percent.

Gas consumption in China, Asia’s biggest economy, has surged in recent years as the government pressures homes and factories to use it instead of coal, in an effort to combat air pollution. The country has been ramping up gas and LNG imports, while analysts say demand will continue to grow in the coming years.

Russia is looking to boost LNG deliveries to the growing Asian market, with storage hubs close to end-users to reduce freight costs and increased flexibility in deliveries. Its largest LNG producer and exporter, Novatek, has been shipping liquefied gas to China via the Northern Sea Route (NSR) along the Arctic coast. Deliveries from the Yamal LNG project have drastically cut delivery time to Asian consumers. Novatek also plans to develop another large-scale project – Arctic LNG 2, which is set to start producing LNG in 2022-2023.

Last year, the Russian company inked an agreement with two Chinese firms under which they will become shareholders in the Arctic LNG 2 project, with a ten-percent stake each.