Russian President Vladimir Putin has called on the government to make the country’s economic growth more stable and eventually bring the national gross domestic product (GDP) above the global average. 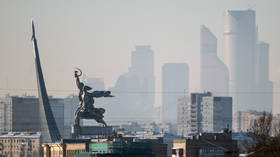 The Russian economy expanded by 2.3 percent in the last quarter of 2019, bringing annual GDP growth to 1.3 percent, the Russian leader said as he met with government officials on Wednesday to discuss the domestic economy and last year’s results.

To support economic development, the country needs to ensure that investment inflows remain strong, said Putin. The Russian government and the central bank should team up to fulfill this task, he added.

“The main priority on our economic agenda is to launch a new investment cycle, to achieve annual investment growth of at least 5, and preferably 5–7 percent, so that next year economic growth rates will exceed global ones,” the president stated, according to an official record of the meeting.