The Bank of Russia is set to further cut its interest rate to the lowest level in the country’s recent history at a meeting later this week, with economists expecting it be reduced by at least 50 basis points. 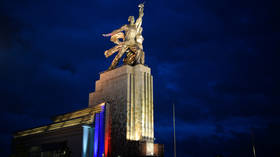 On Friday, the central bank may announce the third consecutive key-rate reduction this year. The regulator lowered it from 6 percent to the current 5.5 percent – the biggest one-time slash since October 2019 – amid coronavirus lockdown and plunging oil prices in April. Before that, the interest rate was changed by 25 basis points in February.

Most economists are expecting the central bank to slash the interest rate by another 50 basis points later this year. According to Russia’s biggest lender, Sberbank, it can be established at five percent before being reduced further. However, even a minimal key-rate reduction will bring it to record lows.

“We expect the сentral bank to reduce the rate to 5 percent on Friday and signal its willingness for further reduction, which will be perceived by the markets as a rate cut to 4 percent by the end of September,” Sberbank strategist Nikolay Minko said, as cited by Russia media.

Last week, the Bank of Russia said it wants to continue the rate-reductions policy, adding that it may do so at an even faster pace.

“The low initial point of inflation at the beginning of the year enables us to continue to reduce the key rate and, moreover, to do this faster, despite the pro-inflationary pressure put by external factors, such as the slump in oil prices,” the bank’s governor, Elvira Nabiullina said.

Pursuing a loose monetary policy differs from the course Russia took during the previous financial crisis and energy market rout. This is because the Russian currency is more stable than it used to be, because the government has been cutting the country’s reliance on oil.

According to derivatives exchange CME Group, during the 2008 global financial crisis, the ruble dropped by 37 percent against the dollar, while, between 2014 and 2016, the decline versus the greenback was above 60 percent. Despite falling sharply in March, the Russian currency has partly rebounded, and was “only 12 percent below its recent January 15, 2020 peak” at the end of last week, the analysis said.

“With Russia’s interest rates still far above zero, its central bank has the option to cut rates to stimulate growth,” CME Group noted.