The Russian economy has withstood the damage of coronavirus-related restrictions better than other leading economies, and the country has been gradually recovering since June, Russian President Vladimir Putin said on Thursday. 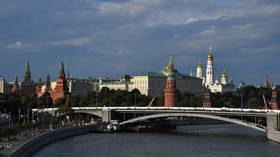 “Many specialists and experts say today that the most acute phase of the crisis has passed. Indeed, economic recovery started in June in Russia, though the recovery of business activity is uneven so far, that is true,” he said.

According to the president, Russia’s GDP fell 8.5 percent in the second quarter of the year, compared with a 9.5 percent decline in the US and the eurozone’s 15 percent plunge.

“To a certain extent, of course, this is connected, as some experts say, with the structure of our economy, but it’s not only that. It is also obvious that the government’s targeted, well-thought-out and, most importantly, timely measures to support labor, enterprises, and entire industries played their role,” said Putin.

He noted that consumption is on the rise in Russia, adding that “such important indicators as electricity consumption and railway cargo transportation volume are gradually returning to last year’s level.” Nevertheless, “much more needs to be done to reach the sustainable growth trajectory,” he said.