South Korea’s Transport Ministry has told local carriers to carry out emergency inspections of Boeing 737s shortly after the US Federal Aviation Administration (FAA) revealed that the jets could be at risk of dual-engine failure. 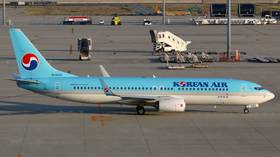 In an emergency order released on Saturday, the Ministry of Land, Infrastructure and Transport (MOLIT) said that nearly 150 jets operated by nine companies are subject to the checks. The inspections will target older Boeing 737 models (not Max planes which are still grounded) that are parked for at least seven straight days, or have had less than 11 flights since being returned to service.

The precautionary measure comes on the heels of the FAA’s Emergency Airworthiness Directive that instructed air companies to inspect some stored Boeing 737 aircraft as the air check valves on the planes could become corroded. This may cause a complete loss of power in both engines without the ability to restart and may force pilots to land before reaching an airport.

Most of the planes affected by the FAA directive are in the US, where around 2,000 older Boeing single-aisle jets have remained grounded as the coronavirus pandemic all but erased travel demand. Meanwhile, India has also ordered three domestic operators which have Boeing 737s in their fleet – SpiceJet, Vistara, and Air India Express – to conduct inspections.