Pork producers in Germany are concerned they may lose their main export market, China, after African swine fever (ASF) was found in a wild boar in Brandenburg. 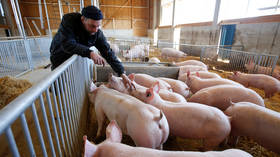 The German government confirmed on Thursday the first case of the highly infectious disease, which is not dangerous to humans but is fatal for pigs and is capable of devastating livestock. This prompted swift reaction from some importers, with South Korea rushing to halt purchases and Japan reportedly following suit.

China is a huge pork consumer and accounts for nearly two-thirds of German pork exports. The country has suffered from an ASF outbreak that killed nearly half its herds. The spread of swine fever and skyrocketing pork prices forced China to ramp up meat imports to offset the shortage.

“It remains to be seen whether China will follow its usual approach, and place a total ban on all German pork imports. Germany has previously been hopeful that it might be able to achieve a regional agreement with China, whereby unaffected areas could still trade,” Bethan Wilkins of Agriculture and Horticulture Development Board (AHDB) wrote.

Germany sold $1.2 billion worth of pork to China in 2019, according to Reuters. Local industry groups have already voiced concerns about the future of German pork exports. Unwilling to lose Asian customers, German farmers have called on Beijing to avoid a blanket ban and restrict supplies from infected areas only.

“I hope that the Chinese market remains open,” said the president of Germany’s DBV farming association, Joachim Rukwied, on German television channel ARD. He noted that the domestic market cannot cover lost demand from the Asian market, which is also vital for the sale of pig parts like ears and tails that are unpopular in Europe.

Meanwhile, Germany’s ISN pig breeders’ association said that the suspension of exports to China “will be very painful” for its pork industry.

China has not announced any official decision on German pork supplies so far. However, German pork prices already felt market pressure, and were reportedly down almost 14 percent on Friday.

If China imposes restrictions on German pork it will need to compensate for lost supplies. Other importers may benefit from the situation. Some analysts noted that US producers may boost supplies to China. 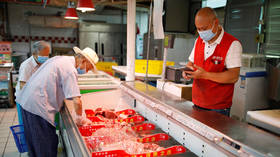