US prosecutors said the son of former Nissan chairman Carlos Ghosn sent about $500,000 in cryptocurrency payments to one of the two Massachusetts men who helped Ghosn escape from Japan in December. 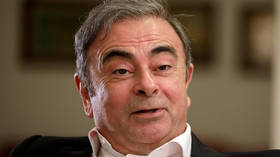 According to the court filing, the payments were made by Anthony Ghosn from January to May of this year, after his father fled from Japan to Lebanon.

The payments went to Peter Taylor and his father, US Army Special Forces veteran Michael Taylor, who have been accused by Japanese authorities of taking part in the escape plot. They allegedly helped Ghosn, who had been living in a court-monitored home in Tokyo while facing financial-crime allegations, flee in a musical-equipment box and private jet.

Ghosn fled to Lebanon, his childhood home, while the Taylors are being held in a county jail outside Boston. They are facing extradition under a Japanese statute that makes it illegal to harbor a criminal. They have argued that they didn’t commit a crime and are seeking release on bail as they fight the extradition charges. Their lawyers have cited, among other things, the risks of catching coronavirus while in jail.

Prosecutors earlier introduced records showing $862,500 in alleged wire transfers from Carlos Ghosn himself to a company associated with Peter Taylor, all taking place before the December escape.

Prosecutors also cited a recent TV interview in which the ex-Nissan boss said he was helping everyone who stood with him. Citing a total of more than $1.3 million, prosecutors argued that the Taylors were “paid handsomely by Ghosn.”

In January, Japanese authorities issued an arrest warrant for a third American citizen, George Antoine Zayek, who remains at large. In the Wednesday filing, prosecutors also showed an aircraft-charter contract, allegedly signed by Zayek, agreeing to pay $350,000 to charter a Turkish jet used in Ghosn’s escape.

Ghosn is widely credited for saving Nissan from collapse when the company was on the verge of bankruptcy nearly two decades ago, and stood behind the creation of the Nissan-Renault-Mitsubishi alliance. He recommended that Renault bail out the Japanese firm, and in 1999, the French carmaker bought 36.8 percent of Nissan.

Japanese prosecutors have accused the businessman of hiding his income and enriching himself through payments to dealerships in other countries. Ghosn has repeatedly denied the allegations, calling his detention “outrageous and arbitrary.” He said all the charges against him are “baseless” and claimed that the real reason for his persecution was his attempt to deepen the alliance between Nissan and Renault.