The Keelings workers controversy has thrown a spotlight on a complex corner of Irish food production.

DURING THE JUNE Bank Holiday weekend, entry and exit points to towns and villages across the country are normally dotted with colourful stalls as the strawberry season kicks into full gear. But these are no normal times.

While Covid-19 restrictions on movement look set to limit the supply of the popular soft fruit directly to customers, it is news on the production side that has caused a bigger stir.

Keeling’s decision to fly in Bulgarian workers to harvest its crop caused outrage on social media last month, with the Minister for Health and the State’s Chief Medical Officer even weighing in on the matter.

While concern over social distancing was the principle issue at hand, the controversy also pointed to the dearth of knowledge about how food is produced on our island, with many learning for the first time about the world of manual labour and production in the horticultural sector that exists beyond the punnet of berries picked up along the roadside.

Horticulture is easily the least well known food sector, running a full gamut of production types, sizes, scale and income levels, from your traditional potatoes and carrots all the way to Christmas trees and ornamental plants.

It is also the smallest piece of the Irish farming jigsaw, taking up less than 1% of agricultural land. It does pack a punch, however. While only directly employing around 7,000 out of the 173,000 who work in the agri-food sector, horticulture contributed an estimated €433m (7% of total) in 2017 in farm gate value – the market value of a product less the selling costs.

If these graphs aren’t working for you, click here for an interactive version.

According to Dermot Callaghan, head of the Horticultural Development Department at Teagasc, the labour-intensive nature of the sector means that it is also proportionally a bigger employer than agriculture, with almost half of all input costs linked to labour. In line with this, the requirements for seasonal labour, he says, “have been part and parcel of the business for decades”.

While access to labour across the board has been impacted severely by the Covid-19 pandemic, this issue is not new, with Callaghan outlining at the Labour in Horticulture conference in January 2019 that employee turnover is persistent and costly, not least in the heavy hitters of mushroom and soft fruit production.

The change in berry production from bucket collection in fields toward protected indoor growing in glasshouses has increased productivity and extended the growing season. This has, in turn, increased the need for more labour for longer stretches of the year.

Much like the set-up in the €50m soft fruit arena, labour is a significant cost in the retail mushroom sector where produce grown indoors is picked by hand. The industry has taken a growing interest in the State’s new pilot permit scheme for non-EU workers, although there has been poor take-up to date.

According to Teagasc, the requirement that workers must earn a minimum of €22,000 based on a 39-hour week has resulted in under-subscription to the scheme across the horticulture sector. Teagasc says that there is concern among growers that this will create a two tier pay system on farms, although a recent survey carried out by the agri-research body estimates that 83% of horticultural workers earned between minimum wage and up to €12 per hour.

The impact of Covid-19 on labour may only compound problems in an industry already prone to external shocks, as, unlike the rest of the horticulture sector geared toward the domestic market, 80% of the annual production of 70,000 tonnes of mushrooms are exported to the UK. The sector – based mainly in the border counties – has already buckled under the weight of Brexit when the value of sterling plunged.

According to Callaghan, larger-scale vegetable production is another sector to be hit by the impacts of Covid-19 as food service markets fall apart. “The food service market, restaurants, pubs and catering, has collapsed, so horticulture food companies will have varying degrees of exposure depending on their market type.”

Market dynamics have changed overnight while at the operational side, access to key inputs like labour and materials have been impacted severely.

This is on the back of many commercial vegetable growers who supply catering and restaurants losing most of their business overnight.

Farmers growing vegetables in both fields and tunnels – generating €105 million of farm gate value in 2018 – are particularly at risk to the full force of market challenges as the sector receives little to no subsidies, making consistent profit an essential component to its survival.

If this graph isn’t working for you, click here for an interactive version.

While most other farming sectors are heavily subsidised, the EU payment scheme is largely linked to the area of land in production, leaving highly productive fruits and vegetables farmers working on small plots at the short end of the stick.

The Department of Agriculture, Food and the Marine (DAFM) does offer direct support to the commercial horticulture sector in the form of grant aid payable at the maximum rate of 40% for approved capital investments. However, for most small-scale growers, they would struggle to put up the level of capital required in the first place.

The Department also runs a multi-million euro scheme to help farmers transition to organic in a bid to move us up from the foot of the European leaderboard. Yet, of the 55 successful applications in the latest round of funding, only one was in horticulture compared to 24 in cereals and 17 in beef. 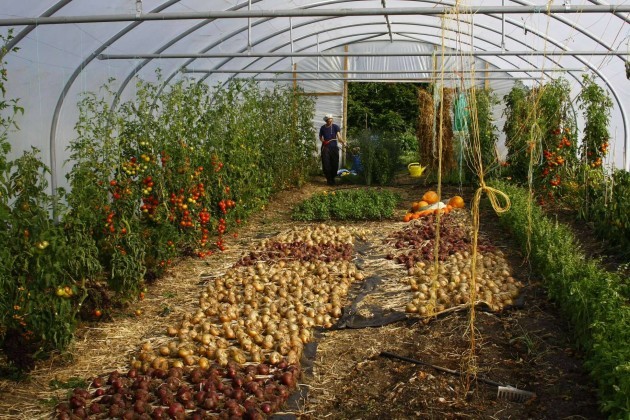 According to Fergal Anderson, who runs Leaf and Root, a fruit and vegetable farm on a few hectares near Loughrea in Co Galway, the grant schemes currently in place do nothing for small scale ecological farmers at the rung of the horticultural ladder.

A founding member of Talamh Beo, a grassroots organisation of farmers, growers and land based workers, Anderson says that there is essentially zero support for small-scale locally focused farms, despite a growing demand for produce both before and during the coronavirus crisis.

Anderson says that his own application for the organic scheme last year was refused as his farm was deemed too small and did not fit in with the more traditional production model on larger fruit and veg farms.

“It just shows how all the schemes are skewed toward larger scale bigger volume [production]and farms such as our own are left to start from scratch,” he says. “There isn’t a box for us on any of the forms”.

If this graph isn’t working for you, click here for an interactive version.

With less support, he says that labour becomes an issue on small holdings as most depend on volunteers during the summer months to help get food out of the ground and out to market.

While Leaf and Root put out a successful call every year to attract volunteers to help out Anderson and his wife Manu during key parts of the season, he says that it is not a long-term solution and “obscures the labour issue”.

You would prefer a system where a small scale farm can employ full-time staff and not depend on voluntary labour. You want a situation where it’s a valued profession.

This, Anderson says, could be facilitated through a well-tailored social welfare scheme for those recently let go from jobs across the country.

The Department of Employment Affairs and Social Protection, with the support of DAFM, Teagasc, and the Irish Farmers’ Association (IFA), recently launched a similar recruitment campaign to find seasonal workers from the Live Register.

While this may help shore up gaps in the labour force this summer, it will take a lot more to get the vegetable sector back to peak numbers and reverse the growing gap between imports and exports of vegetables.

The latest Bord Bia census shows that the sector has contracted sharply in recent years, with the number of commercial field vegetable growers falling from 377 to 165 over a 15-year period between 1999 and 2014.

Dominic Quinn of Castleruddery Organic Farm, an organic fruit and vegetable farm nestled in the foothills of the Wicklow Mountains since 1989, says that the desire for cheaper and cheaper food over the years has forced a lot of people out of the industry.

“If you’re a young fella, growing up on a vegetable farm in north county Dublin, and you see your father and mother being put to the pins of their collar every year with prices being forced down to keep the supermarkets happy, you’re not going to go down that road.”

Why would you see your parents going through all that hardship and all these specials being done in supermarkets for, you know, broccoli, 90 cents a kilo, or carrots for 20 cents a kilo.

Quinn’s set-up started on a few hectares to sustain himself and his young family, growing over the years as the mixed vegetable farm increased supply to supermarkets and restaurants, before he and his wife Hilda made the decision a few years ago to scale back down to three hectares.

This has allowed them to focus on growing a range of crops all year round mainly for direct selling at markets and through their farm shop. This has helped them to avoid the worst market impacts of Covid-19, keep the running of the farm a family affair and fully return to their roots as “large-scale organic gardeners”.

“I suppose we’ve been kind of realising that we didn’t want to get bigger, what we wanted to do was get a bit smaller and more efficient with our work because it is so labour intensive,” he says, pointing to the need for public awareness campaigning from the State above direct subsidies for the sector. “People forget that aspect of the job, the background stuff, the hard graft that goes into growing and harvesting food.”

Do you want to know more about the ins and outs of the horticultural sector?

The Noteworthy team wants to do an in-depth investigation to examine labour conditions in the sector and what can be done to ensure food security for our island as well as create local, sustainable supply chains that benefits the community, farmers and labourers.