The recent stock rout has wiped out over $1 trillion from the value of America’s biggest tech corporations, including the world’s most valuable company Apple and online giant Amazon – but it failed to erase all their 2020 gains. 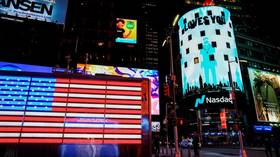 US benchmark indices finished lower for the third session in a row on Tuesday amid a massive sell-off in high-flying technology stocks, which were the main drivers of the market rally amid coronavirus uncertainty. The Dow Jones Industrial Average dropped over 600 points, while the tech-heavy Nasdaq Composite shed over 400 points – more than four percent – to close in correction territory.

Several disappointing trading sessions cost Apple, which became the first US company to reach a $2 trillion market capitalization last month, around $325 billion. Shares of the iPhone maker were down nearly seven percent on Tuesday, while Goldman Sachs warned its clients that the company may lose a third of its market cap over the next 12 months, according to CNBC.

“To help put that in perspective, that’s about 1.5 Salesforces, and equivalent to Apple’s projected revenues for the next calendar year,” Jefferies’ tech sector specialist, Jared Weisfeld, told CNBC of the Apple stock losses.

Amazon, which enjoyed a huge boost in sales during the pandemic, shed $191 billion. Microsoft and Alphabet were down $219 billion and $135 billion respectively, while Facebook declined by $89 billion.

Elon Musk’s Tesla was also among the big losers. On Tuesday, the electric carmaker suffered its worst single-day loss in its history, as its stock closed more than 21 percent lower, wiping out around $80 billion of its market value. Given earlier losses, Tesla cratered by $109 billion in the last three days – more than the combined value of General Motors, Ford and Fiat Chrysler Automobiles.

The six biggest tech firms had a combined market cap of $8.2 trillion last Wednesday, but when the markets closed on Tuesday, they were worth $7.1 trillion. Even given the massive losses, the six tech majors are still worth over $2 trillion more than they were at the beginning of the year, before the Covid-19 outbreak started rapidly spreading across the globe. 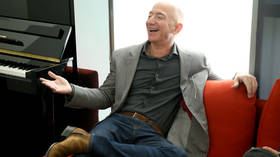