How Sky’s coverage of the new-look Premier League looked on its first night back.

WELCOME BACK, THEN, to popular incubator of political agitation and social progress, The Premier League.

“In March, football fell silent”, read the Sky Sports montage at the top of their coverage, “but the beautiful game found its voice.”

It maintained that voice yesterday, even in the absence of Rt Hon. Marcus Rashford, Leader of Her Majesty’s Most Loyal Opposition.

Players and officials took a knee just prior to kick-off in both games, and Sky were eager to engage with the issue throughout the day.

Everyone wore Black Lives Matter badges and they played out an interview between Gary Neville and Raheem Sterling on the topic.

Neville himself said he needed to do more to promote equality in his role as part-owner of Salford City, and admitted to being ashamed over not speaking out over racism as a player.

He and Jamie Carragher were considered leaders at Manchester United and Liverpool, he said, but neither said anything publicly about racism or discrimination. “That’s not leadership.”

As for the players, rarely was such a loud message sent in silence.

These empty grounds are, as Kelly Cates told us ahead of Aston Villa and Sheffield United, “the new normal.” 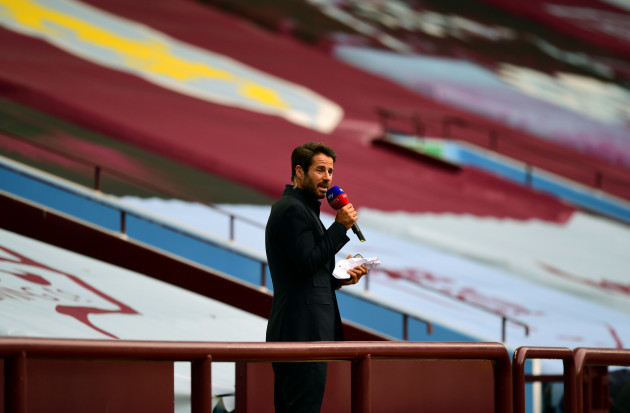 The new normal lasted just under 45 minutes, then, as we all exploded in rage and mockery at VAR.

Not that this was solely a VAR problem. Sheffield United, helped by the backtracking Villa goalkeeper, clearly forced the ball over the line only for referee Michael Oliver to wave away appeals for a goal, pointing to his watch to indicate the Goal Decision System remained unmoved.

As it turned out, the goal-line tech was on the fritz, and operators Hawkeye later apologised for what they termed a one-in-9,000 mistake.

VAR, what with it supposedly being operated by a human with actual human eyes, could have called a halt and reviewed the goal, but no.

“VAR could have overruled GDS”, rued Kelly Cates. The latter, to mangle an old Aprés Match sketch, evidently shaded the decision by a consonant.

Older habits died harder ahead of the later game, as Geoff Shreeves asked Pep Guardiola whether it would be strange to face his old protege Mikel Arteta.

Given he asked that question at a distance of two metres in a stadium of disinfected footballs and empty stands, we reckon that there might a few stranger things going on.

Sky viewers had the option of watching games with fake crowd noise, which consisted of archived sounds recorded at previous editions of that fixture, initially intended for the Fifa video game series.

It was well-executed, with the rise and rapid fall of thwarted cheers when a shot hit the side netting a particularly deft touch. (They didn’t include any ‘Fuck VAR’ chants, unfortunately.)

The footage of Manchester City vs Arsenal may well have been canned too, given how often we have seen precisely that Arsenal performance.

Such was Arsenal’s commitment to normality, there was even a 30-minute flourish of disaster from David Luiz, to whom the entire world resembles a rake.

What more is there to say, wheezed Neville on commentary, while Carragher said this was likely the end of Luiz and the Premier League.

If these biosecure games are showing the Premier League to be just another TV show than Luiz is its Junior Soprano: a once-respected leader who was slowly played just for laughs, right up to the point of becoming a baffling liability to those around him.

Overall, this new and antiseptic competition is a deeply diminished thing, but for all its faults and its venalities, it can still occasionally stand for something.

“White people should say sorry for the way we have treated black people for 400 years”, said Pep Guardiola after City’s victory.

“Watching that makes me smile”, responded Micah Richards. “Because sometimes, you can feel alone.”