Britain’s economic outlook for 2020 has been downgraded to an 11.5-percent contraction by leading economic forecaster EY ITEM Club. That’s worse than the eight-percent decline forecast by the EY in June. 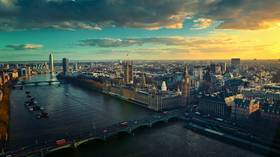 “With hopes of a V-shaped recovery fading, the UK economy is now not expected to match its Q4 2019 size until late-2024 – much later than the early-2023 prediction from the June forecast. Additionally, the EY ITEM Club now expects the Q2 GDP contraction to come in at a record 20 percent – a sizeable downgrade from the 15 percent contraction predicted last month,” EY said.

Growth prospects for 2021 have been raised slightly, with the economy now forecast to grow 6.5 percent over the year, up from the 5.6 percent predicted in June’s forecast, and up from 4.5 percent in April’s forecast. “The EY ITEM Club expects the economy to return to growth in Q3 2020 with expansion around 12 percent quarter-on-quarter (q/q).”

#EYITEM forecasts #UK#GDP contraction of 11.5% in 2020, downgraded from the 8.0% predicted in June and from 6.8% in April. Read our Summer Forecast for more information: https://t.co/qyAlC7udQO#EYITEM

EY further explained that the downgrades have been largely driven by weaker-than-expected growth of just 1.8 percent in May, with the services sector particularly hampered by coronavirus, even as restrictions ease.

Howard Archer, chief economic advisor to the EY Item Club, said: “Even though lockdown restrictions are easing, consumer caution has been much more pronounced than expected. We believe that consumer confidence is one of three key factors likely to weigh on the UK economy over the rest of the year, alongside the impact of rising unemployment and low levels of business investment.

“The UK economy may be past its low point but it is looking increasingly likely that the climb back is going to be a lot longer than expected. May’s growth undershot even the lowest forecasts. By the middle of this year, the economy was a fifth smaller than it was at the start. Such a fall creates more room for rapid growth later, but it will be from a much lower base.”

EY expects the UK’s unemployment rate to more than double to nine percent at the turn of the year, from 3.9 percent in the three months to May. This will contribute to weak levels of consumer spending, forecast to fall by 11.6 percent this year before rising by 6.6 percent in 2021 as the jobs market starts to recover.

“The labour market’s performance is key to the economy’s prospects over both the short term and further out,” Archer said, adding: “Job losses and poor real wage growth are expected to hold back consumer spending … It is possible that the chancellor will look to provide further help for the labour market in this autumn’s budget.”