In a move that could further escalate the US-China trade war, Washington is getting ready to ban agricultural imports from western China’s Xinjiang region, alleging that those goods could be produced with forced labor. 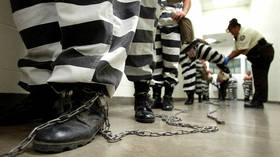 RT’s Boom Bust sat with the author of ‘Understanding Socialism’ and the host of Economic Update, Professor Richard Wolff, to discuss the possible ban which is set to restrict tomato and cotton imports from the region.

“Very dangerous slippery slope,” Wolff said referring to the planned move, which he calls purely political as the US tries to use China as “a whipping boy.”

He pointed out that the US has around 2.5 million prisoners, many of whom get wages from 20 to 40 cents an hour. “That’s effectively slave labor. And those companies that are working with American prisoners to produce goods are using slave labor.”

The analyst added that American firms working in China should not react to “the political noise.” While the Trump administration has been actively trying to force the firms to relocate amid the escalating tensions, most are still not going to pack their things.

“Business is doing business as usual in China, they are making enormous profits as they have,” Wolff noted, adding that the companies are not going to make any expensive decisions before the elections, hoping that this “scapegoat” rhetoric may go away.