The outcome of the case affects claims made by some 1,000 Irish pubs and restaurants against insurers.

THE HIGH COURT has ruled that four pub owners are entitled to be compensated by insurer FBD for the disruption their businesses suffered due to the Covid-19 pandemic.

In a landmark decision, the outcome of which affects claims made by some 1,000 Irish pubs and restaurants, Mr Justice Denis McDonald found that a policy sold by FBD covered losses the pubs sustained by having to close due to the global health emergency.

The dispute arose after the insurer refused to provide policyholders with cover after the pandemic resulted in the first temporary closure of businesses, in mid-March 2020.

In a lengthy and detailed judgement delivered today, the judge disagreed with FBD’s interpretation of its policy.

Judge McDonald said cover is not lost if the closure is prompted by nationwide outbreaks of a disease, provided that there is an outbreak within a 25-mile radius of the premises and that the outbreak is one of the causes of the closure.

The issue of quantifying the losses, the judge said will be dealt with at a later date.

The fourth action was taken by Leinster Overview Concepts Ltd the owner of Sean’s Bar, which is based in Athlone, Co Westmeath.

The publicans challenged FBD Insurance Plc’s refusal to indemnify them, as well as the insurer’s stance that its policies of insurance did not cover the disruption caused to businesses by Covid-19.

Judgment in the case, which took several weeks to hear, was due to be delivered in January.

The decision was deferred to allow the parties to make submissions to the court arising out of a judgment from the UK’s Supreme Court where similar issues were raised.

Each of the pub owners claimed that under their policies of insurance taken out with FBD they are entitled to have their consequential losses covered by what they claimed is an insurable risk.

They also claimed that by failing to pay out on the policy the insurer was in breach of contract.

The publicans claimed the policies taken out with FBD contain a clause that states the pubs will be indemnified if their premises were closed by order of the local or Government Authority if there are “Outbreaks of contagious or infectious diseases on the premises or within 25 miles of same.”

FBD disputed the claims and argued that the closures did not occur as a result of an outbreak of disease at the premises or areas where the pubs are located.

FBD also told the court that it has never provided cover for pandemics and no one in Ireland has ever asked for it.

The general insurance market in Ireland does not insure against events like pandemics, it claimed.

Only specialist brokers, which he said are based overseas, on a bespoke basis offer an insurance policy that cover the fall-out from something like covid19, FBD also argued. 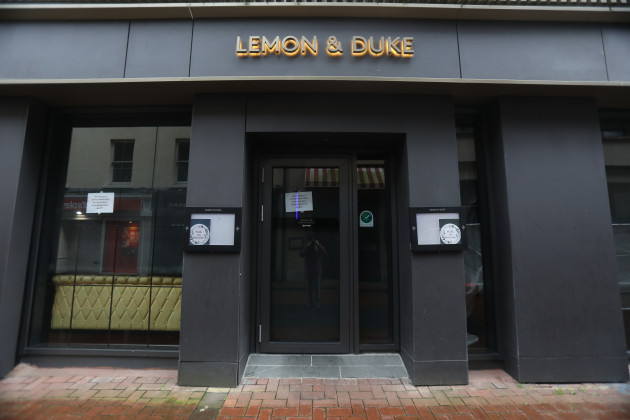 Noel Anderson, Managing Director of Lemon & Duke said the court’s decision represents vindication for his premises and the other businesses dependent on the outcome of this action.

“I would like to thank my family, friends, my business partners, fellow publicans and the wider public for their encouragement and support throughout this difficult period. We could not have achieved this outcome without the tremendous faith and understanding shown by our staff during these very testing times where they were understandably concerned about the implications for their livelihoods.

It should never have come to this. I specifically had taken out a business interruption policy to protect us against Covid-19 and its potential impact on our business. As the court heard during the trial, this was acknowledged in writing by FBD.

The decision by the High Court thas been “warmly welcomed” by the Vintners Federation of Ireland (VFI), the 1,100 publicans who are FBD customers and the wider pub sector.

VFI Chief Executive Padraig Cribben said: “This High Court decision is the first good news the 1,100 publicans who are FBD customers have received since the crisis began last March.

“Publicans took out business interruption cover with FBD in good faith and the decision by the insurance company to challenge that cover caused huge distress for our members at a time when they were at their most vulnerable.

The Licensed Vintners Association said it is now calling on insurers to quickly review their business interruption policies in light of today’s decision and to promptly pay all valid claims.

“These publicans deserve enormous credit as their action will prove critical to pubs with similar policies right around Ireland,” said Donall O’Keeffe, Chief Executive of the LVA.

“It was grossly unfair that these family businesses had to go to the High Court against the might of a publicly quoted insurer to have their claims validated.

“Given the disastrous impact of the pandemic on the pub trade, today’s judgement will provide hope to many publicans all across the country.”

Labour’s finance spokesperson Ged Nash described today’s ruling as a “watershed moment” and “a shot in the arm for beleaguered main street businesses across the country “.

“These pub businesses should never been placed in this position, having to seek redress in the Courts to obtain compensation on a valid claim for Covid-19 related disruption to their businesses,” said Nash.

“It is nothing short of insulting after years of sky high, perpetually escalating high premiums and suspect practices from the insurance sector. The details of this David v Goliath case shows yet again the contempt with which some in the industry hold their loyal, bob creating customers.”

Nash added that the government needs to get a grip on the insurance industry which he says requires a radical shake-up.

“The gloves must be taken off and all options, including a levy on insurance profits must now be considered to bring an out of control sector to heel.”

With reporting by Garreth MacNamee and Adam Daly