Banksy’s trademark rat can be seen causing mayhem in a bathroom. BRITISH ARTIST BANKSY have revealed a lockdown-inspired work, bringing his trademark rat character to what purports to be bathroom.

The elusive artist shared five images on Instagram this evening, with the caption: “My hates it when I work from home.”

In the images, the rats are shown knocking the bathroom mirror to one side, hanging on the light pull, swinging on a towel ring and stepping on a tube of toothpaste. 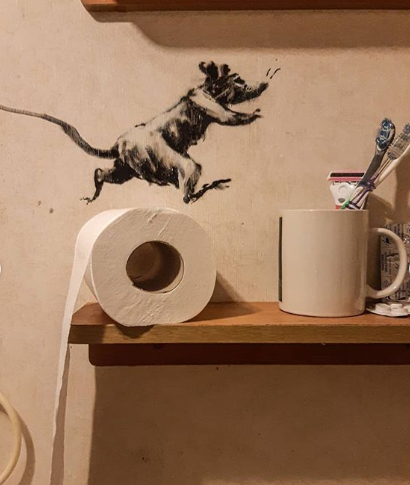 One rat is seen skipping on a roll of toilet paper, which has rolled down and across the floor. Banksy is originally from Bristol and first gained fame as a graffiti artist before going onto to international acclaim, selling multi-million euro pieces across the world.

His work often satirises consumerism and he has been a frequent critic of the art world his work now inhabits. In 2018, one of his artworks partially self-destructed after being sold for €1.2 million at London auction.

He later revealed that it was intended that the paining be shredded completely.