While problems remain, the Boys in Green produced an improved display against Qatar on Tuesday.

1. Experienced stars show Stephen Kenny what he was missing

LAST NIGHT may not have been quite the “exhilarating” football Stephen Kenny is aiming to achieve with Ireland, but it was at least a step in the right direction.

The obvious caveats apply — it was only a friendly and with Qatar ranked 58th in the world, 16 places below Ireland, the Boys in Green should be expecting to put in a decent showing against a side of that standard.

But after two morale-sapping losses, the Irish team badly needed some positives to cling to before the end of the international break, with their next matches not happening until June, when they face Andorra and Hungary in friendlies, and their next World Cup qualifier against Portugal as far away as September.

After the disappointing display against Luxembourg, Kenny made eight changes, with the team having a far more experienced look compared with the youthful side that took to the field at the Aviva last weekend.

Of course, there were some familiar problems — Ireland faded after a very bright opening, while the Boys in Green still are nowhere near clinical enough in the final third.

Yet after how bad Saturday was, Tuesday was certainly an improvement.

Qatar should not be underestimated — they are the reigning Asian champions and have previously beaten both Azerbaijan and Luxembourg, and given how poorly Ireland fared against the latter, the more pessimistic fans may have feared the worst going into last night’s encounter.

But the most obvious difference was the number of experienced players Ireland had in the team from the outset.

James McClean, in particular, looked like a man with a point to prove, although his effort in an Irish jersey is never in question and Kenny indicated in the post-match interview with RTÉ that the Stoke City player’s exclusion from the start on Saturday was more down to a lack of match fitness rather than any concerns with his ability.

The Derry native scored his 11th international goal as early as the fourth minute, having gone 24 matches for Ireland without finding the net. He also proved his worth in a defensive capacity, after slotting into the left wing-back role, marshalling Pedro Miguel — also known as Ró-Ró — the 30-year-old wing-back, who was one of his team’s biggest threats down the right.

Shane Long, too, put in a good performance. He made a number of intelligent runs and was usually integral when Ireland were on top and had some good attacking moments in the first half.

His goalscoring record at club level is inferior to James Collins, which is probably the main reason why the Luton man got the nod at the weekend.

However, while the Tipperary native may be marginally less likely to score a goal than his rival for the forward spot, the Bournemouth attacker’s performance last night suggests he is better at helping to build attacks and more influential in terms of contributing to the team playing well as a unit.

Shane Duffy also gave a display that suggested he remains more than capable of doing a good job at this level, with his leadership providing confidence to those around him and giving the backline a more stable look, disproving those who felt his awful form at Celtic would be carried onto the international scene.

Even Robbie Brady, in the short time he had on the pitch before his luckless run with injuries of late continued, almost scored a spectacular goal and showed flashes that he was still capable of being an important player at this level.

Detractors might question why he did not play all or at least some of those players from the beginning at the weekend, though Kenny would likely argue that in the case of McClean and Brady, recent injury issues were always going to limit their involvement, while similarly, with Long and Duffy, a significant lack of game time at club level meant regularly playing 90 minutes over the course of a long international break was always going to be a big ask.

Such circumstances serve as a reminder that while results under Kenny have been poor, bad fortune with player withdrawals and the lack of fitness of others have been a big factor during this demoralising 11-match winless run.

And although the extra experience on the pitch in Hungary made some difference, it would be an exaggeration to suggest it had a major transformational effect. The drab second half at times was just poor as the Luxembourg game.

So overall, a draw was probably a fair result. Qatar had greater possession (55%) and increasingly controlled the play as the match progressed, though the Boys in Green ultimately carved out the better chances, with five shots on target to their opponents’ two.

2. Is three-at-the-back here to stay? 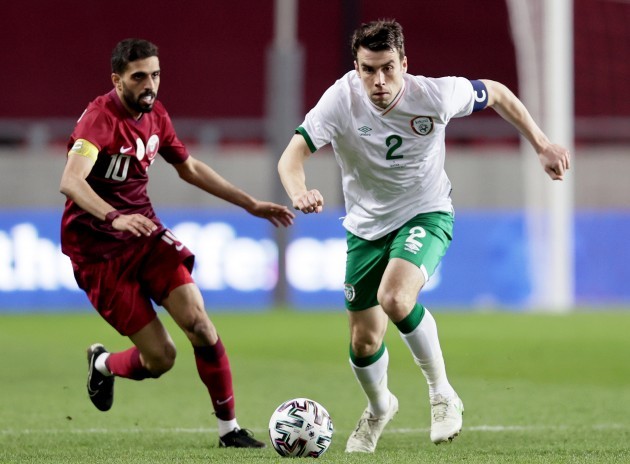 In one sense, Kenny reverted to the familiar last night, showing greater reliance on the established stars as mentioned above.

Yet on the other hand, you could also argue he doubled down in a sense.

One of the biggest criticisms after the Luxembourg defeat was reserved for the three-at-the-back tactics, with many of his detractors expressing reservations about this formation.

In addition, it was widely suspected that Kenny’s main reason for employing the strategy in the first place was in order to get arguably his two best players, Matt Doherty and Seamus Coleman, into the same team, while also putting Enda Stevens in the role to which he is most accustomed at club level.

The fact that Doherty and Stevens were both ruled out of Tuesday’s game added to the expectancy that the experiment would be ditched, yet once again, Ireland lined out with a back three in Debrecen, as Shane Duffy replaced Ciaran Clark in an otherwise unchanged defence.

It should be noted that the system was not an exact replica of what had been implemented in the opening two World Cup qualifiers.

Whereas against Serbia and Luxembourg, it was more of a 3-5-2 with Alan Browne in the advanced midfield role and two strikers ahead of him, at the Nagyerdei Stadion, Ireland began with more of a 3-4-3 that saw Shane Long as the main striker along with Daryl Horgan and Robbie Brady in the wide attacking roles.

Three-at-the-back has been a system regularly employed by Thomas Tuchel’s Chelsea in the Premier League this season, and perhaps Ireland’s reversion to this approach and Blues coach Anthony Barry’s recent arrival on the scene is no coincidence.

Whether Kenny is happy enough to stick with it in the long term remains to be seen, but last night showed he is, at the very least, unwilling to write it off as a failed experiment just yet. 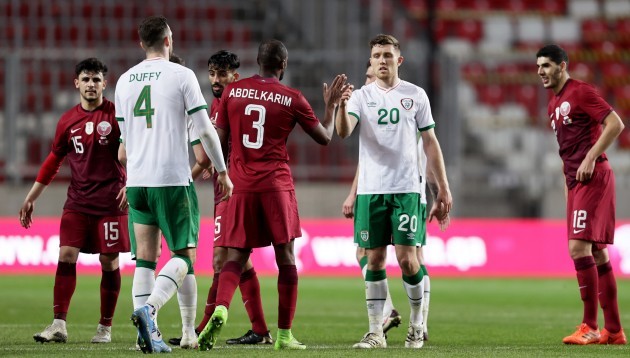 Ireland’s Dara O’Shea with Abdulkarim Hassan of Qatar after the game.

One is the captain, Seamus Coleman, and the other is 22-year-old Dara O’Shea, an indication of the esteem in which the duo are currently held by the Irish management.

O’Shea now has seven caps for Ireland, all of which have been won under Stephen Kenny, since making his senior debut during the Nations League clash against Finland in October 2020.

The West Brom youngster was also a favourite of Kenny while he was U21 manager, with O’Shea a virtual ever present at the heart of the defence alongside Conor Masterson.

Sheffield United star John Egan will likely regain his place in the backline upon his return from injury, but O’Shea looks a strong candidate as the preferred choice to play alongside him as it stands.

While Shane Duffy provided a reminder of his quality against the Qataris, Kenny clearly feels he needs to be performing better at club level if he is to regain his previous status as one of the first names on the teamsheet.

The Dubliner’s greater comfort on the ball also gives him an edge over Duffy, as he appears more suited to the style the Irish boss favours.

That said, if the 29-year-old Derry native can play as well as he did last night on a consistent basis, he may yet be key to Kenny’s plans going forward.