WHEN PETTY CRIMINAL William ‘Bill’ O’Neal was picked up by police in Chicago while trying to hijack a car in 1966, his life took a drastic twist.

O’Neal was not just trying to hijack a car – he was also posing as a federal officer at the time. While dealing with his case, the FBI asked him to impersonate someone else – a member of the Black Panther Party. This was in exchange for having the charges against him dropped.

O’Neal, who was Black, found himself infiltrating the Illinois chapter of the Black Panther Party, specifically befriending its leader, the young and charismatic Fred Hampton.

But their entanglement had a disastrous end for Hampton, impacting the US’s civil rights movement.

Now their story is being told in a new film, Judas and the Black Messiah, directed by Shaka King and written by brothers Kenny and Keith Lucas, and Will Berson. King hasn’t been a high-profile director up to this point, but this film has catapulted him into the big leagues, with Oscar hopes being pinned on his feature.

He tells the story of O’Neal and Hampton through a stellar cast – Hampton is played by British actor Daniel Kaluuya, while Lakeith Stanfield is O’Neal. Both previously starred together in Get Out, while Stanfield worked on one of King’s short films, 2017′s LaZercism.

Kaluuya is fantastic at inhabiting Hampton’s physical strength and charisma, while Stanfield’s nervy depiction of the sly O’Neal is perfectly pitched. Kaluuya recently won Best Supporting Actor at the recent Golden Globes and Critics’ Choice Awards in the US for his role. Dominique Fishback plays Deborah Johnson, Hampton’s partner and mother of his son.

Hampton’s activities in the Black Panther Party came at a time when the FBI had its eye firmly on the Panthers’ activities. In 1956 the FBI had begun its COINTELPRO program (short for Counterintelligence Program). While initially its focus was on the Communist Party, this grew in the early 1960s to include groups it considered ‘subversive’, like the Black Panther Party. The activities of COINTELPRO included bugging the phones of Martin Luther King. FBI Director J Edgar Hoover is played in the film by Martin Sheen.

Hampton’s assassination on 4 December 1969 by members of the Chicago Police Department was part of a COINTELPRO operation. And O’Neal played a critical role in Hampton’s death, which the film explores.

King tells TheJournal.ie that while he was familiar with Hampton’s story, he wasn’t so familiar with O’Neal’s life until the Lucas brothers approached him with their script.

The film comes from the Warner Bros stable. King says that many studios were approached about making it, but “didn’t feel like it would be commercial enough”. That attitude wasn’t a surprise to King.

“It was interesting, because I had had a similar experience of making a much smaller film that was kind of a crash course in the industry, in that [it showed me how]people value black leads,” he says, referring to his debut feature Newlyweeds.

“And obviously between 2013 and now it’s been somewhat of a shift… which a friend calls the ‘Black excellence industrial complex’. Studios recognising that Black movies are incredibly profitable, not so much their attitude towards them from a political, emotional perspective, moral perspective.

“Understanding that we’re now in the Black excellence industrial complex, I imagined that there would be a bidding war… Because you know, my producer [Ryan Coogler] was coming off of directing the most successful Black film in history [Black Panther] and not to mention my other producer was putting up half of the budget. So it just surprised me, but you can only do so much.”

He says the realisation that it was going to be tricky to get a studio on board “was another time in my life as a Black man in this world where I was like wait – remember? Like, of course…”

It made him think about “everything you’ve experienced, everything your parents have told you, your grandparents told you”.

“How could I make this movie and lose sight of that, you know what I mean? So it was a surprise, but it wasn’t.

“I realised when you embrace the truth, it gives you the opportunity to really do something about it. I think that just speaks to the resilience of my people, we’re incredibly resourceful and resilient, and like, can’t be stopped, you know what I mean? Which in a lot of ways is the point of the movie. The movie ends with the information that Fred Hampton Jr is carrying on his father’s legacy. Like, he did not stop. We are still here. The revolution continues.” 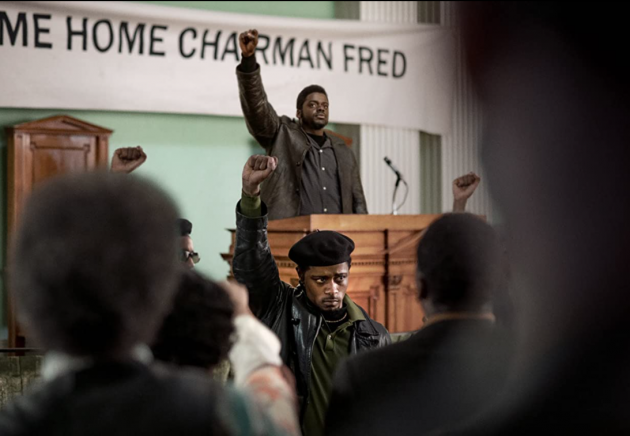 For New York native Shaka King, this is a film that shows “two different examples of ways to live your life”. The film carefully balances how it portrays the two men – never shying away from illuminating the racism and corruption that led to O’Neal becoming an informer, but also not forgetting that he was a human being too.

Similarly, it’s not a hagiography of Hampton, but fully shows his youthful intensity and ability to think beyond the binaries of the time and make an impact on marginalised communities. The viewer is left in no doubt about his aims and what he accomplished, even in the face of an FBI that wanted to bring him down.

“We look [in the film]at people who are two people on opposite sides of the human spectrum in a lot of ways, a socialist and a capitalist… and the one that was very individualistic and someone who built coalitions across racial lines,” continues King.

“And I feel like it’s an opportunity for you as a viewer to… I feel like it is important to make William O’Neal not sympathetic, but to give context to his behaviour,” explains King. “Because when you do that, it gives you an opportunity to place yourself in that position and question what, you know, what would you do? And what have you done?”

Stanfield, meanwhile, has said that ”O’Neal did some things that I found reprehensible, but I had to find a way to connect to his humanity”.

King says that while making the movie, and particularly working with Stanfield, “it was like, you have to think about instances in your life when you prioritised yourself; whether you do that all the time. You know what I mean?”

He gives the example of “being on the train and you see a man harassing a woman, and you turn the other way. You don’t want to get into a fight.” He says that while O’Neal might turn away, ”Fred Hampton would not have done that.” The actions of the men in the film make us reckon with our own behaviour in real life. Would we be willing to betray someone else, it if helped us save our skin? And conversely, would we be willing to put our life on the line, in order to fight for what we believe in?

Judas and the Black Messiah is a beautiful looking movie. Filmed in Cleveland, though set in Chicago, it renders the period wonderfully, with incredibly deep tones of blue, brown and green in particular.

King says that he and the film’s director of photography, Sean Bobbitt, both love high contrast – intense shades of darkness and light. They watched “a bunch of movies together” for inspiration. One particular film’s look was a specific reference point for them visually.

“We never watched the Godfather but it was always in our minds. Always the lighting in that film,” says King.

Huge attention was paid to the film’s look, and research included examining several hundred photographs of Chicago from that era, which were “a real ultimate reference point for coming up with the look of this film”, says King.

When scouting Cleveland, they “found these locations that just might as well come out of those photographs”.  That attention to detail and period, combined with a strong cast and an ability to tell a multi-layered story in a human way, makes Judas and the Black Messiah one of the stand-out films of the year so far.

Judas and the Black Messiah, from Warner Bros, is out now and available to rent online.