French journalist Philippe Auclair is the latest guest on Behind the Lines.

IT BEGAN WITH Arsène Who? and concluded with Wenger Out!, but there was quite a story packed in between.

And while Arsène Wenger and Arsenal became a fraught and toxic relationship by the end, since the 2018 uncoupling Wenger hasn’t worked in management and little has worked for Arsenal at all.

French journalist Philippe Auclair covered the Wenger years closely for France Football, and he is our guest on this week’s episode of Behind the Lines, in which we discussed Wenger along with a range of topics, including music, Eric Cantona and why he believes the only football loser in the Brexit deal is Ireland.

(Behind the Lines is exclusively available to members of The42. Each episode features a lengthy interview with a writer about their career and their favourite pieces of sportswriting, so for access to a 59-episode back catalogue, head over to members.the42.ie.)

Though he rarely showed it, Auclair believes Wenger was deeply hurt by the acrid end to his time at Arsenal, chiefly remembered for the performative – and profitable – rage of Arsenal Fan TV.

“Yes, I think some of the fans went way beyond what was acceptable and reasonable and I think they are beginning to realise that now. Not that Arsène should be immune to criticism, I didn’t hold back myself. I am also convinced he stayed for one or two years too many.

“As to how he felt about it: he was deeply hurt. He is a very, very sensitive man who is also a very secretive man. He likes to keep things to himself, and he doesn’t like to make any great shows of emotion. You’ll never have seen Arsène Wenger going on the pitch to salute the crowd unless it was for his goodbye, or even to shake his players hands on the pitch. As soon as the final whistle was blown, it was handshake and into the dressing room.

“Which is extraordinary for someone who has such a knack for presenting himself. He can captivate an audience within five seconds, and hold it captive for the duration of his speech.” 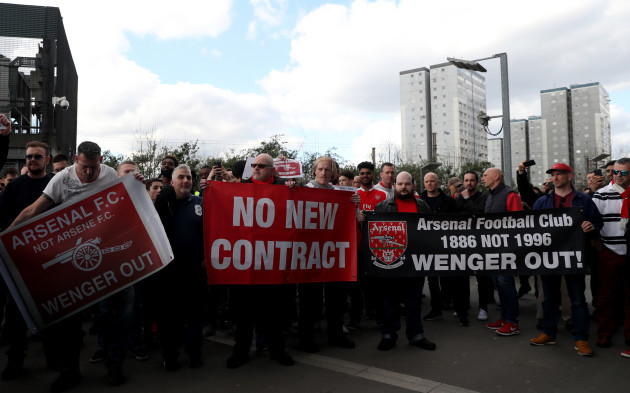 Arsenal fans protest against Wenger in 2017.

Wenger has not worked as a manager since leaving Arsenal, and is now working with Fifa, as their Chief of Global Football Development. Auclair, however, is not surprised that Wenger has not returned to management.

“Not really. At one stage he was quite close to taking the Lyon job, that was in 2019. Did he feel it wasn’t big enough a job? I don’t know. It may be that he came to realise his days as a manager had come to an end, and it was time for him to start a new life, which he has done.

“I am not surprised. I thought at one point that if France had done badly at the 2018 World Cup, he might have taken the national team manager position. As you know, France didn’t really fluff the World Cup, Didier Deschamps remains in place and Arsène Wenger will probably never be the national team manager, which is something I deeply regret, because the kind of football this French team could play with a manager like Arsène Wenger is the stuff of dreams. I’m not sure they would win anything, but by heck, they would be some team to watch.

“Can you imagine? With those guys? Wow.”

And what of the present French team, the largely imperious world champions with an astonishing depth of talent that nonetheless persist playing a relatively grey, functional style of football? How are they viewed in their homeland?

“There was a lot of joy, of course, but there was a lot of criticism, which is ridiculous based on the results. You play a Euros final and lose it to a goal from a guy who will never score again in his life, and then win the World Cup in fairly convincing fashion having not been in real trouble throughout the tournament.

“But I’m deeply frustrated by this team: there are moments they put moves together and if they could play like that over 90 minutes, they would be unbeatable.

“Perhaps they are unbeatable. They have so many solutions. But that is Deschamps. He gets a lot of flak, people say we should not only win, we have got a generation of players we’ve never seen the likes of before, and we will probably never see the like of it again. It is freakish.

“I have to say, the 2018 World Cup success left me completely cold. I was far more taken with the Belgian team. I’m  not a nationalist, politically or in sporting terms, but the 1998 and 2000 team I was 100% behind and absolutely loved them.

“In 2006 I was really excited, even though there was Domenech, though we knew Domenech had been told by the senior players, ‘Keep in your office, we will take care of it’.

“It is also my generation: as a kid, my team was Platini’s team. Platini’s team was a romantic dream, it played better football than the ’98/2000 or 2018 teams ever did.”

Listen to the full interview by subscribing at members.the42.ie.