Netflix just released the highly controversial award-winning French pre-tween twerking movie ‘Cuties’, and it’s about as bad as one would expect. 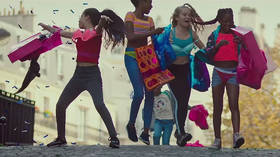 To call it pedo-bait would be an understatement. Barely a 10-minute segment passes by without the viewer witnessing 11-year-old girls in tight clothing humping the floor, or camera shots that zoom in on their butts, accentuating every crevice and curve. This occurs when members of the young cast are in short shorts or even just their underwear. And don’t get me started on the groin shots or full on pubic rubbing.

Just describing what I witnessed during my watch-through of the film makes me feel perverted and gross. And all of the above just barely scratches the surface of its gratuitous sexual content.

Never before have I labeled a film as irresponsible, but this one checks that box.

Allow me to remind you that this film is about 11-year-olds, and it doesn’t use de-aged actresses. Its lead is actually that same age. So the camera is running up the ass crack of a very real child. It is exploitive, and frankly just wrong.

It astounds me how director Maïmouna Doucouré could be so misguided. One must only read interviews and see the film to understand that she came into the project with good intent. But due to horrific direction and poor decision making, her entire message became distorted beyond repair.

If you have shares in @netflix you support Child Pornography, there is no other way to call this video. Cancel your @netflix subscription, don’t let them normalize Pedophilia. pic.twitter.com/mFewiCEVH4

The film’s core theme is about highlighting the impact of internet culture on girls barely hitting puberty. We see this in the real world where ever younger females are debasing themselves in an attempt to be seen as hot and popular. Browse TikTok or Instagram for five seconds and the toxic influence of social media is blatantly apparent. Kids are mimicking what they see, and what they’re seeing is a constant source of sexuality.

In that sense, and with the film’s theme in mind, I can’t deny that part of it is powerful. Roughly 80 percent of the movie works as is. It tells the story of a young Senegalese immigrant who is struggling to balance her family’s deep traditions with the modern world she inhabits. She veers further towards what one might describe as Western degeneracy after befriending another equally young girl who dances suggestively, disobeys authority, and who wears revealing clothing. The lead is further taken towards her new friend’s lifestyle after stealing a cellphone and getting caught up in social media.

All of that is valid messaging, and it’s definitely a topic worth exploring, but it’s the extra 20 percent that burns all good intentions to the ground. I would go so far as to call this film unsalvageable.

How it’s ?18+ movie for 11yo girls ?#CancelNexflixpic.twitter.com/EM5ZuVLW61

The final dance scene hammers this home. It’s an elongated dance segment where the girls hump, twerk, and grind, and the camera catches every awkwardly disgusting moment, but it didn’t need any of that. Throughout the entire film it’s been building up to their inappropriate dance competition, and this is where the director could have used the audience’s imaginations against them.

Instead of showing the girls debasing themselves in high resolution, the camera could have negated showing them altogether and focused on the crowd. I argue an overly long one-take shot that goes on for an uncomfortably long 4-5 minutes that just highlights the growing disgust of the people watching would have pushed the movie goer into imagining the worst. We know the girls are doing something gross, and staring at the crowd as they grow concerned would be like staring into our own souls as we’d have to recognize the errors of this culture we have bred into being.

That would have been impactful.

god this makes me so uncomfortable wth- #CancelNexflixpic.twitter.com/Od9xTxbdPF

But that’s not what we get. What is instead delivered by Netflix is content only a pedophile could appreciate, and that is not content worth celebrating or watching. I hate saying this just as much as I hate imagining it, but I have zero doubts perverts are watching these clips on repeat. It is legalized child porn. It’s TV-MA rating makes this clear, it is a movie for adults that features everything I’ve described. It is irresponsible filmmaking to the nth degree, and in a culture where child actors continually come forward with abuse stories or where well-known Hollywood elites are outed as sex pests and worse, how could any director believe filming content in such a way was a good idea? Perhaps worse still is that Netflix not only chose to purchase the rights, but they promoted it based on its sexual content.

There is just so much wrong with this picture.

Although this does make me wonder just what the hell is going on with critics too, because as of this writing, the film has an 88 percent approval rating on Rotten Tomatoes. Go figure.