FREEWHEELIN DYLAN CAUSED a seismic shock with a 150-1 victory in the Irish Grand National at Fairyhouse.

Dermot McLoughlin’s charge was widely unconsidered for the €400,000 showpiece on what was his first appearance since finishing last of eight runners at Punchestown in October.

However, ridden brilliantly by Ricky Doyle, the nine-year-old was in front after jumping the first fence and was never headed.

Thyestes Chaser runner-up Run Wild Fred looked a big danger rounding the home turn, but could never quite get on terms with Freewheelin Dylan, who galloped all the way to the line for a one-and-a-quarter-length win.

Run Wild Fred was a clear second, with Enjoy D’allen third and 9-2 favourite Latest Exhibition a creditable fourth under the weight burden of 11st 10lb.

Easy Game got back on the winning trail with a determined display in the Devenish Chase earlier.

The Willie Mullins-trained seven-year-old had been a little disappointing since landing the PWC Champion Chase at Gowran Park in October – most recently unseating his rider at Thurles in January.

With likely favourite Fakir D’oudairies a significant non-runner, Easy Game was the 11-8 market leader for his latest Grade Two test, with Brian Hayes taking over in the saddle from the sidelined Paul Townend.

Having jumped with zest and travelled powerfully on the heels of the leaders, the French-bred gelding moved to the lead early in the home straight, with Castlegrace Paddy emerging as his biggest threat.

There was not much to choose between the pair approaching the final obstacle, but it was Easy Game who jumped it the better and that may well have proved crucial, with just three-quarters of a length separating the pair at the line. 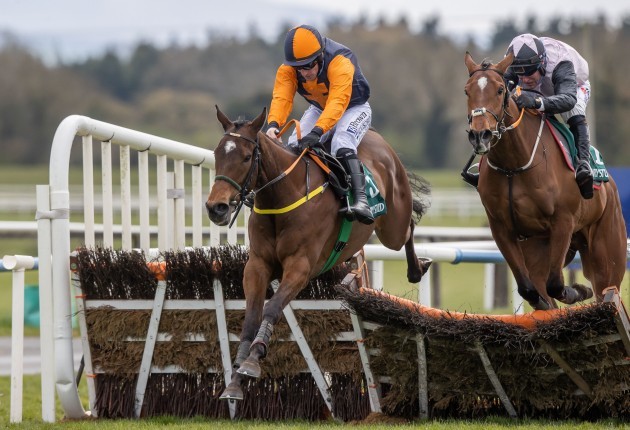 Sean Flanagan on board Jeff Kidder clears the last to win.

A winner over the course and distance earlier in the campaign, Noel Meade’s charge was last seen springing an 80-1 surprise in the Boodles Juvenile Handicap Hurdle in the Cotswolds last month.

Despite that big-race triumph, Jeff Kidder was second-best in the market for this Grade Two contest at 5-1, with the previously unbeaten Teahupoo all the rage as the 4-7 market leader.

It turned into a straight shootout between the two from early in the home straight – and while Teahupoo loomed up looking a big threat, Jeff Kidder already looked to be getting the better of the argument when the odds-on shot produced an untidy leap at the final flight.

In the end Sean Flanagan’s mount prove his Cheltenham success was no fluke with a decisive three-length verdict. 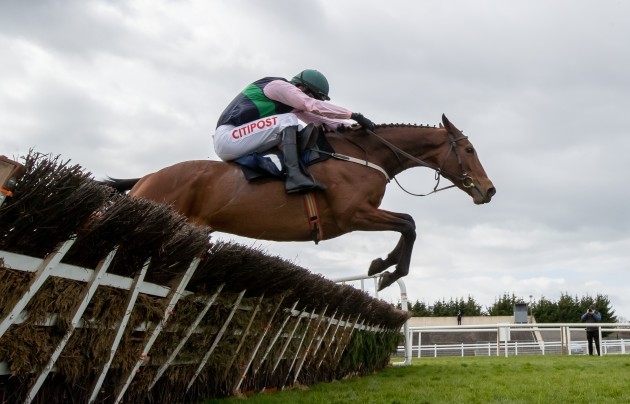 Danny Mullins on board Stormy Ireland comes home to win.

The Motivator mare won six times during her first stint with the Closutton handler, before being moved to Paul Nicholls’ yard along with the rest of owner Jared Sullivan’s Irish-based string.

She failed to win in four starts in Britain, but having since been sold to new owners for £75,000, she was a 7-2 chance on her first start since returning to the Mullins yard.

Sent straight to the lead by the trainer’s nephew Danny Mullins, Stormy Ireland set a sound gallop from flag-fall and had enough in the tank to hold off 85-40 favourite French Dynamite by a length and a quarter.