Three US Navy sailors aboard aircraft carrier USS Theodore Roosevelt tested positive for coronavirus, the acting Naval Secretary has revealed. They will be airlifted off the ship, which hosts 5,000 troops in the Philippine Sea. 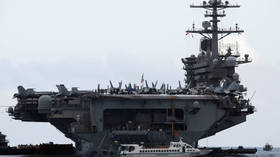 The three servicemembers are the first coronavirus cases discovered on board a deployed Navy ship, Acting Navy Secretary Thomas Modly told reporters at a Pentagon briefing on Tuesday. Currently in quarantine, the sick trio will be flown off the ship later today.

Pentagon officials diverged from President Donald Trump’s narrative during Tuesday’s briefing, which was conducted virtually, warning that the outbreak could occupy the nation for as long as three months. “I think we need to plan for this to be a few months long at least and we’re taking all precautionary measures to do that,” Defense Secretary Mark Esper told reporters. The Pentagon has reported 321 cases of coronavirus, including 174 active-duty personnel, 59 civilians, 61 dependents, and 27 contractors, as of Tuesday. A single contractor at the Defense Security Cooperation Agency died on Saturday after testing positive for the virus.

Trump, meanwhile, has declared he wants the US economy back up and running by Easter Sunday, less than three weeks away. The US has 50,206 confirmed cases of coronavirus, according to Johns Hopkins University, and 606 deaths.