US women soccer players who stood for their national anthem as their league got underway again have been labelled ‘dumb white bitches’ for not kneeling. How has patriotism now become a cause for offence? 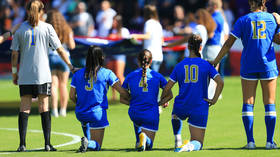 The world has really gone bonkers when it is seemingly an act of defiance to stand for your own country’s national anthem. It used to be the least controversial thing in the world, indeed the polite thing to do. Personally, I tend to do it for countries other than my own as well, as a mark of respect, whether that be at an international sports fixture, or just at an event where the anthem is played.

I’m British so we don’t play ours a great deal. We do at Royal events obviously (the song is, after all, for Her Majesty), before England plays a football match, and at the FA cup final and so on, but for the most part that’s it. But Americans play their national anthem a lot. The Star-Spangled Banner is belted out before virtually every sporting fixture from little league right up to the professional leagues.

I’ve always quite liked that aspect, it feels like a good unifier before, for example, a bunch of blokes knock seven bells out of each other on an NFL field. Even though the song is literally about the Yanks giving my boys a hell of a beating during the War of 1812; I’ve always stood up and dutifully removed my hat just before “Oh, say can you see…” rings out around the stadium, or wherever.

But as the Women’s Nation Soccer League got underway at the weekend, virtually all the players made the decision to “take a knee” during the national anthem, rather than the usual standing to attention.

Kneeling before the start of the game follows decisions taken by many soccer leagues in Europe, including the Premier League, as well as emblazoning Black Lives Matter on the back of their shirts. The irony of a bunch of millionaires kneeling in an empty stadium in a show of solidarity with an avowedly Marxist organisation was apparently lost on the league, but that’s not what we are here to discuss.

The big difference is that in European football leagues the national anthem is not played. The English Premier League plays some electronic nonsense for reasons best known to themselves, the Champions League plays a version of Zadok the Priest but they do not play national anthems. This is presumably due to the very international make-up of the players who play in the various leagues. The one exception to this in England is for the FA Cup final where God Save the Queen is played.

However, in the US leagues they play the anthem before every game in all the leagues. This is, of course, where the practice of “taking a knee” came from when former San Francisco 49ers quarterback Colin Kaepernick started kneeling during the anthem shortly after he was cut from the starting line-up in 2016 (you may see a correlation, I couldn’t possibly comment). Now, far from being an outlier move, kneeling is the norm during the anthem at sporting fixtures, at least it was when the NWSL returned last weekend.

At virtually all of the fixtures, all the players took a knee. Such was the prevalence of the practice that it was those who opted to do the traditional thing and stand for the anthem that drew the most attention. Players for the Chicago Red Stars, Washington Spirit and North Carolina Courage all stood while the Star-Spangled Banner played. All the players in question wore all the de rigeur BLM regalia, as the rest did – black t-shirts and armbands – and kneeled with the others when a moment was taken for respect for “victims of racial injustice,” though this was not seen to be enough obeisance by their critics.

Why has this former act of normality of standing during the anthem now become seen as an act of defiance? Has the world been so swept up in a whirlwind of retribution and social justice that any remnants of the old order must be rejected? That kneeling to the BLM takes precedence over standing to attention to the American anthem?

Many aspersions were cast upon the motivation behind those women who took the decision to stand. Most wildly speculated that the women must be white supremacists. One of the footballers was labelled a “dumb white bitch,”while another critic helpfully circulated a “Bitches Who Stood” list, giving all their names.

But some supporters, often with equally little information, lavished praise on them, describing them as “brave” and “patriots.”

The telling thing for both sides was that none of the players’ performances on the pitch received anything like the coverage over their decision of whether to stand or kneel. In most cases, neither side even bothered to identify the players, nor the teams they played for.

These protests are likely to continue into the more mainstream American sports such as the NFL, MBA, NBA, NHL etc. What will be interesting to see is how unanimous the kneeling is once the stands are full again. When the fans are back, will the players still be taking the knee?

It is impossible to say now, of course, but what this has highlighted is that the combination of the BLM protests and lockdown has meant that only the extremes of both sides are getting an airing. There is very little way of knowing how the average sports fan feels about players kneeling for the anthem, if public opinion hasn’t shifted since the last time kneeling was an issue (over Kaepernick) then it is a safe bet that the majority do not support it.

It is worth noting that one of the women who stood for the anthem, the North Carolina Courage reserve goalkeeper, Samantha Leshnak Murphy, is the daughter of a veteran. I would hazard a guess this would be her chief motivation for respecting the anthem and the flag, rather than latent racism. Especially given that she chose a black minister to oversee her wedding.

dis game… i cant even enjoy it… thank you rachel hill, shoulda stayed in the lockers pic.twitter.com/OUQ21sXmkI

Another woman, Rachel Hill, who was the only player to stand for the Chicago Red Stars, was also the subject of think-pieces about her motivations. She was standing next to a black teammate, Casey Short, who was overcome by emotion during the show of solidarity and began to cry.

The image of Short crying and Hill standing, prompted a writer from Yahoo! Sports to wonder: “Did Hill request to stand next to Short specifically because she knew she wasn’t going to kneel, but also wanted to put her arm on her shoulder as a way of showing support? Should white people show solidarity regardless of how they feel, because a big part of this entire moment in America is due to failure to look beyond oneself?”

How about she just likes America and is doing what the entire country was doing until a month ago when people randomly decided another thing was the right thing to do? Surely, if you supported Kaepernick’s right to kneel, Hill’s right to stand is undeniable?

We now find ourselves in a world where everything is politicised. Movies, cartoons, music, statues, TV shows and even sports are now all dripping with the politics of the day. These used to be things people enjoyed for escapism, not to be further lectured on how awful the world is. Where does this end? What will be the next cause celebre that consumes everything? Are we ever just going to be able to watch sport for sport’s sake again, rather than everything just becoming a new front in the culture war?

The Star-Spangled banner is a hymn to freedom and the American ideal. Surely activists who say they want to improve America should want to claim that song for themselves, rather than race to disavow it. Or do they not want the USA to be the “land of the free and the home of the brave?”