US Senator Tom Cotton has introduced a bill to prevent the New York Times’ 1619 Project from being taught in American schools that receive federal funds. He’s right to do so, as its anti-US propaganda has no place there. 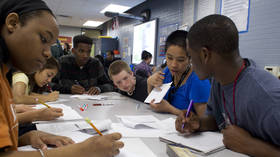 Over the past year, the 1619 Project has been a major talking point with regard to how the United States is looked-at throughout history.

The project, a series of essays from the New York Times Magazine, paints the US as a place that was founded on the basis of slavery. And among some of its more outlandish claims are the ideas that black people have done more for democracy than white people and that capitalism was invented by slavery, as my colleague Igor Ogorodnev discussed last year.

The inaccuracies are one galling element of this. What is equally disturbing is that there are people who think this should be taught in schools. Some have already updated their curricula to include it.

Now Arkansas Republican Senator Tom Cotton has introduced a bill called the Saving American History Act, which would strip federal funding from any school that has it in the curriculum.

The NYT’s 1619 Project is a racially divisive, revisionist account of history that denies the noble principles of freedom & equality on which our nation was founded. Federal funding shouldn’t help indoctrinate young Americans w/ this left-wing garbage. https://t.co/YmWD0xOC8z

With any situation like this, one should consider free speech. Does the New York Times and anyone else involved have the right to publish the 1619 Project? Absolutely. But the bill isn’t proposing to make it illegal by any means. The fact is that the government shouldn’t be using taxpayer dollars to subsidize nonsense.

Though I’m not a parent, were I one I’d wonder what on earth was going on if schools were teaching that the world was moulded by Cthulhu and the Starborn Ones. That would be preposterous, and clearly my tax dollars shouldn’t go to such things. It’s a waste of money. The same can be said of the 1619 Project. I’d rather any future children of mine learn the truth.

There are two significant issues that arise with the teaching of the 1619 Project in American schools. The first is, of course, the subsidizing of anti-American propaganda, and the second is that we’d also be bankrolling the results of it. Why on earth would a government want tax dollars to go towards content that’s meant to indoctrinate people to despise their own nation?

Over the past couple of months, America has been blighted by people who believe exactly that tearing up our cities. Millions of dollars of damage has been seen across the country, all brought about by Black Lives Matter and Antifa.

Of course, both of these are organizations which believe America is inherently racist, which the 1619 Project proclaims as well. Why would the Federal Government ever want to have this mess happen again? The fact is that most people are fed-up with this far-left doctrine, and it’s about time the government finally said “no.”

By all means, the 1619 Project can be published and people are welcome to read it. Put it in a library, even. But just remember it belongs in the Fiction section.