Everyone knows the Black Sea is an attractive place in summer, but this year American pilots seem especially drawn to its shores. For the third time since Thursday, Russia’s Air Force has intercepted a US spy plane in the area. 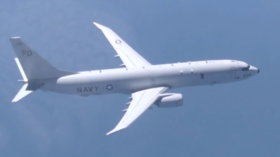 A Russian Su-27 jet was scrambled to escort an American Р-8А Poseidon surveillance aircraft above the Black Sea after it was spotted once again scanning Russia’s southern borders, some 8,000 kilometers away from home.

The radar picked up “an aerial target” approaching the border over the neutral waters on Monday, Russia’s Ministry of Defence said in a statement. An Su-27 fighter jet, which took off from a coastal airfield, approached the object from a safe distance and identified it as Р-8А Poseidon.