Kenny stuck with a system that didn’t work in what proved to be arguably the worst home defeat in Irish football history.

THE OVERRIDING EMOTION of Saturday night was a kind of crushing, blanketing hopelessness, and it’s difficult to conceive of lower ebb in the recent history of Irish football.

The last three-and-a-half years have been filled with moments of almost comic bleakness but they were at least eased by the notion that these were largely choices, and that it didn’t have to be this way; that Stephen Kenny’s bold prophecies might bring about a change.

Now Kenny is implicated in it all, with the realisation settling in that maybe Irish football’s panacea is not the neat parable of self-determination that Kenny tells.

He is right to tell us it’s “unacceptable” to lose at home to Luxembourg given it is, on balance, probably the worst home result in this country’s history.

That said, the gap between the sides is not as wide as status might tell you. in 2018, a technicality spared Ireland relegation to League C of the most recent Nations League, a competition in which Luxembourg then gathered 10 points and missed out on promotion by just two points.

And not to grim you out any further, but based on these two sides’ trajectory, in a few years’ time this result may not have quite the same sheen of abject disgrace that it has now.

Plus, it’s hardly unusual for a game of international football to be decided by a single moment of quality by the one Champions League player on the pitch, as was the case on Saturday night.

That he was Gerson Rodrigues and not Irish was, of course, the latest damning indictment of the moral and near-financial bankruptcy that Irish football has institutionalised across much of the last two decades. 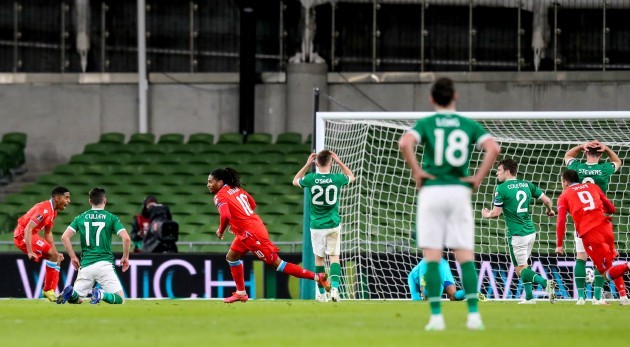 Much of the reaction to Saturday night focused on the fact the dearth of talent available to Kenny is a result of the managed decline of Irish football in its Champagne Football Years, and while those arguments are entirely correct, they are not new. These were inquests first held after the 5-1 loss to Denmark in 2017.

The idea behind Kenny’s appointment is that he might succeed in spite of all of that, with his commitment to a style in which Ireland can proactively construct their own attacks by keeping hold of the ball. While this might be a fairly meagre ambition by world football standards, by our standards he was spreading dreams beneath Irish football’s schlepping feet.

But amid the weekend’s frenzied discourse one fact was lost: it is possible Stephen Kenny’s ideas and vision for the Irish team are the right ones, and it is also possible that Stephen Kenny is not the right man to implement them. As brutally as that idea will hurt Kenny himself, it’s possible for both of those facts to be true at the same time.

Kenny has been hit with a lot of unfair criticism in his time in charge thus far but no manager can escape the flak that flies when they lose at home to Luxembourg, particularly in the anemic and torpid way Ireland failed on Saturday night.

This was one of the first games in which it can be said that Kenny failed on his own terms. Having been denied continuity throughout the autumn, he stuck with his 3-5-2 system for Saturday’s game. It didn’t work, but he stuck with it nonetheless.

It worked to a point in Belgrade but that was a game in which Ireland could be reactive rather than proactive, which is a greater test of what Kenny is trying to instill. Thus Luxembourg wrote that exam on Saturday: ‘Okay, this is what we’re doing. Now go ahead and show us what you’ve got.’

When he was unveiled almost a year ago, Kenny spoke of what he learned in defeat to Brazil at the Toulon tournament as U21s manager, and of how they pushed one flank higher than the other to effectively tilt the pitch and create new angles of passing.

Luxembourg did that without the ball on Saturday night. When Gavin Bazunu was restarting play, they  pushed high on their left to effectively force Ireland to play out through the left side of their defence, which they were unable to do.

You’ll see it illustrated in a few screen grabs from he first half below: 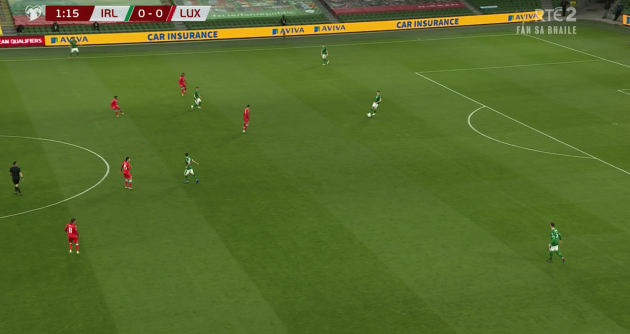 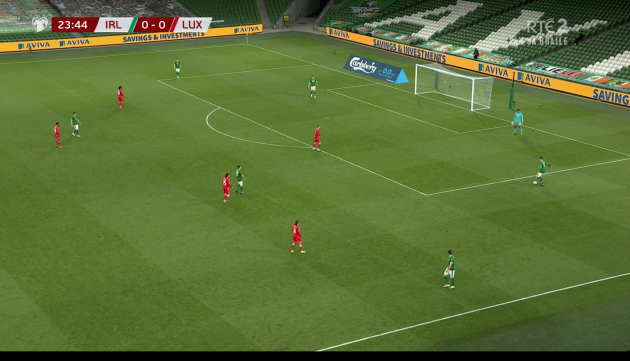 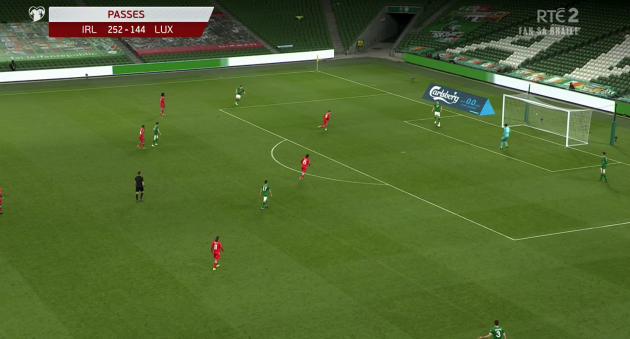 Luxembourg identified Ciaran Clark as a weakness at left wing-back, so they allowed him to have the ball and then pressed him. Clark and those around him – Josh Cullen and Enda Stevens, mainly – lacked the technique to play out of those tight positions.

One of Kenny’s beliefs is the Irish players can do much more than what has been asked of them under previous managers, but this was a painful instance of players not being capable of answering the questions asked of them.

In the second minute, Clark played the ball infield to Cullen, who was pressed by a trio of Luxembourg players and lost possession, which culminated in a shot from range which Bazunu saved.

Cullen was disappointing in possession all night, largely unable to open his body up, take the ball from Clark, turn and sweep the ball right. This is, in fairness, a difficult job, and lamentably no Irish midfielder has convincingly done it since Declan Rice.

But this was the huge frustration of Ireland’s first half: as soon as they did beat that initial Luxembourg press, they threatened on the right flank as Seamus Coleman and Matt Doherty have formed a good understanding. In the ninth minute Coleman made a clever underlapping run to create space for Jason Knight to overlap Doherty, who took the ball and whipped a good cross into the box for Alan Browne.

The one good chance of the game – that sweeping move that ended with Collins missing from close range – began with Clark giving the ball back to Bazunu, who played a terrific first-time pass wide on the right flank to Doherty, who then kicked the move into gear. Given the young goalkeeper was picked for his distribution skills, Ireland should have used them more often.

But instead the ball kept finding its way to Clark, who usually dallied on the ball and, more often than not, gave it away. His paucity of passing options meant it was hardly entirely his fault, but he had a torrid night, giving the ball away five times in the first 12 minutes and a total of nine times by the time he was taken off on the hour mark. (Stevens then dropped into that position, who was more comfortable though under slightly less pressure as Luxembourg tired.)

Kenny will likely point to the fact Ireland had some joy down the other flank, but that they got the ball out there so rarely means persisting with the system was, on balance, a mistake.

But at least the system had its pros and cons in the first half, as sticking by it in the second half after Doherty left through injury seemed faintly bewildering. Ahead of the game, Kenny explained the many reasons he used the 3-5-2 in Belgrade: it allowed Coleman and Doherty into the same team, returned Doherty and Stevens to familiar positions, gave Aaron Connolly a partner up front, allowed Alan Browne push on to be a goalscoring threat in the box, and matched Serbia’s 3-4-3. 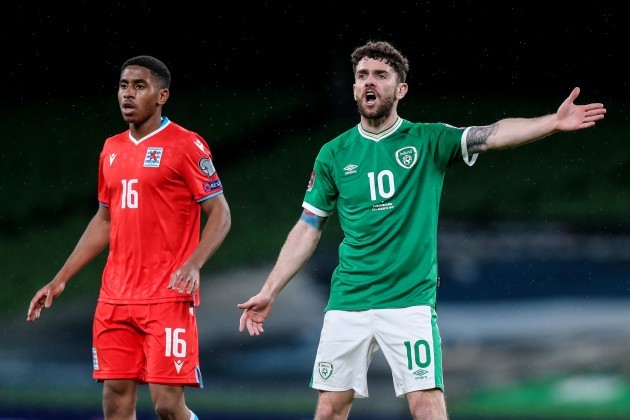 Robbie Brady gesticulates during the defeat.

Starting out in the second half in Dublin the facts had changed but Kenny stuck with the formation.Luxembourg weren’t playing in a 4-3-3, Doherty and Connolly were no longer there, and Browne was moved from the No.10 position to right wing-back.

It left Ireland undermanned when chasing the game – they often persisted with keeping two centre backs and two midfielders behind the ball in the final quarter – and it also blunted Coleman’s attacking thrust down the right, as he failed to figure out where to run with Browne and often Robbie Brady ahead of him. Ireland didn’t force a corner in the second half until the 87th minute, and that came from Coleman sprinting down the right touchline in desperation after the concession of the goal.

Kenny, to his credit, gave a detailed explanation after the game as to why he didn’t change things, saying his ideal wingers in a 4-3-3 were either absent (O’Dowda, Connolly) or lacking fitness (McClean, Brady). Daryl Horgan offered an option off the bench, however, and a formation in which he and Brady cut in from either wing, with Stevens and Coleman overlapping and Browne and Knight pushing into the box to support Collins was surely worth trying.

“I take responsibility”, said Kenny. “I introduced the formation and we have no points after two games.”

It’s unfair to pin all the blame for the defeat on the manager – Ireland lacked quality but they weren’t as lacking as the game showed; it was peppered by imprecise passes from players who are capable of much better – but he could have done more to influence the result from the touchline.

He has shown an ability to fix mistakes thus far – Ireland conceded twice off a second-phase set piece against England and that hasn’t happened since, for instance – and he must address the errors made on Saturday.

But ultimately, Ireland’s World Cup hopes are effectively dead already. Miserably, there is now five months until their next group game, at which it will be more than two years since Ireland last won a competitive game.  And that game is away to Portugal.

The FAI yesterday gave Kenny their backing, with Chairperson Roy Barrett saying he is in line for a contract extension at the end of this campaign if more improvement is shown. President Gerry McAnaney is in the team bubble and he too gave Kenny his support, stressing the unity of the squad is seen by the fact that nobody has been “heading for the hills.”

The FAI say financial concerns don’t come into it when deciding to terminate a contract early, but Kenny will be given time and will likely see out this qualification campaign. They may as well: a national team that can’t attract a shirt sponsor are unlikely to attract a better manager than the one they’ve got.

Kenny has time, but then all anyone has at the moment is time.

Time to stew on 10-game winless run, time to prepare for another World Cup without Ireland, and time to realise that not only has the world left Irish football behind, we’re not catching up nearly as quickly as we had hoped we might.