Yerevan urged Turkey, on Sunday, not to meddle in ongoing hostilities over the disputed Nagorno-Karabakh enclave, warning that the conflict could engulf the region. Ankara had earlier pledged “full support” to Azerbaijan. 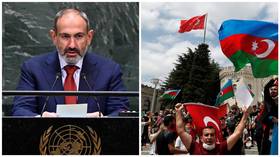 “Turkey’s aggressive behavior is a serious cause for concern,” Armenian Prime Minister Nikol Pashinyan said in a televised address to the nation on Sunday. Turkish President Recep Tayyip Erdogan had previously said Azerbaijan, which is involved in heavy border fighting over the disputed Nagorno-Karabakh, “is not alone” in the confrontation.

Such a stance “is fraught with catastrophic consequences for the South Caucasus and adjacent regions,” PM Pashinyan said. The international community should keep Turkey out of the conflict, he added, warning that the confrontation risked getting out of hand.

The situation could have irreversible consequences, (and) move beyond the borders of the region and threaten international peace and stability.

Pashinyan also accused Baku of declaring “a war on the Armenian people” and blamed Azerbaijan for triggering the current hostilities.

Turkey has repeatedly expressed support for its Azeri “brothers,” and Erdogan didn’t mince his words on Sunday when he called Armenia “the biggest threat to peace and tranquility in the region.” He said the whole Turkish nation was ready to stand by Azerbaijan “with its entire means, as always.” He did not expand on what “means” could be made available to Azerbaijan. Lower-tier Turkish officials backed up his sentiments.

Hostilities between Armenia and Azerbaijan broke out along the Nagorno-Karabakh border early on Sunday, involving artillery shelling, tank raids, and combat aircraft sorties. Both sides reported civilian casualties, and claimed they inflicted losses on one another. Armenia has declared martial law and issued a full conscription call, as did the Armenian-populated enclave.

The renewed clashes prompted intense diplomatic activity to prevent the two arch-rivals from sliding into a full-blown confrontation. The Kremlin, a stakeholder within the Minsk Group, has already held telephone talks with Armenia, Azerbaijan, and Turkey, urging an immediate ceasefire and a return to dialogue. Paris and EU institutions have issued similar messages.