Here we go again. A month after Donald Trump talked about Russia once again attending the G7 assembly of powerful states, Germany’s foreign minister has ruled it out. Meanwhile, nobody seems to be listening to what Moscow thinks. 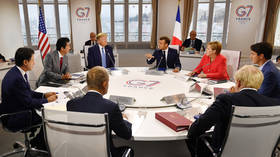 At this point, it’s become like parents trying to punish a child by denying them what they think is a favorite toy, without realizing that the kid has already moved on to a new plaything.

Despite Russia’s foreign ministry and the Kremlin repeatedly pointing out that Moscow is not enthusiastic about restoring the G8, Western members of the club continue to cross swords about whether Russia should be brought back. None seem to have consulted the Kremlin about whether it even wants to rejoin the group.

Russian deputy foreign minister, Sergey Ryabkov, says out loud what the dogs on the street know in Moscow: Russia has no interest in rejoining the G7/G8, even if invited back (as Donald Trump has suggested it should be). https://t.co/QFXhCXs0Jr

In June, US President Donald Trump told Fox News Radio that it is “common sense” to invite Russian President Vladimir Putin to an expanded G7 summit. This caused ructions in American liberal media and among some commenters in other member states of the bloc.

Now, the latest to intervene is Germany’s foreign minister. On Monday morning German state media Deutsche Welle reported “Germany has rejected a proposal floated by US President Donald Trump to allow Russia back into the Group of Seven (G7) most advanced economies, German Foreign Minister Heiko Maas said, in an interview published Monday.”

All these comments generate big headlines around the world. But there’s one major problem: Russia clearly isn’t as interested in the topic as the other members of the erstwhile G8. That setup was suspended in 2014 when Western countries refused to come to Sochi for a planned summit. At the time, the stated reason was objections to Russia’s reabsorption of Crimea, following the Kiev Maidan and the subsequent referendum on the peninsula. The US, and its allies, still recognize Ukrainian sovereignty over the territory and regard the vote as illegitimate.

On Monday afternoon Putin’s spokesman made a point of once again clarifying Moscow’s position. Dmitry Peskov said the Russian President “has never come forward with initiatives, appeals or actions” regarding Russia being readmitted.

He further pointed out that Putin believes the larger G20 group of nations is more relevant today and is more in line with contemporary realities. Peskov added that the Kremlin believes the format is pointless without the participation of India, Turkey, China, Brazil and other leading countries.

So there, basically. The West thinks it’s punishing Moscow by denying it access to the G7. But Russia is rather bemused because it thinks the whole thing is redundant. What Peskov didn’t say, but Kremlin insiders admit privately, is that the Russian leadership is also wary of pivoting back to the West because of how this might be perceived in Beijing.

Since the events of 2014, Russia and China have become increasingly close and any move by Moscow to suddenly revert to its previous Western path would look inconsistent. Indeed, some in Beijing may even perceive it as a sort of betrayal.

What’s more, in the years leading up to the suspension of the G8, Russia had become increasingly disinterested. Putin didn’t even bother to attend the 2012 renewal in Maryland and cut an aloof figure at the 2013 event in Ireland.

Alexey Pushkov, a veteran Russian senator from Putin’s United Russia party tweeted on Monday: “When Maas opposes the return of Russia to the G7, he is talking to Trump, not Moscow. This is an internal discussion of the Western allies. Russia does not seek (a place in) the G7. The G7 loses more from the absence of Russia than Russia does from its non-participation in the G7. Trump understands this. In Berlin, they apparently do not.” Pushkov is the former head of the Foreign Affairs Committee in the Russian parliament and his observations usually align with establishment thinking in Moscow.