Russia’s Siberian Arctic has recorded its hottest ever average June temperature, with the region being more than five degrees higher than typical. 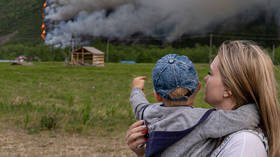 That’s according to scientists at the European Union’s Copernicus Programme, which observes the Earth and collects data on weather, vegetation, and sea level, amongst others.

At the Copernicus Programme, scientists say that the Russian Arctic broke its previous record by more than a degree, with some areas of the Arctic seeing temperature rises of more than 10 degrees.

Russia is also suffering from mass forest fires and has seen a dramatic spike in carbon dioxide in the air. On June 29, the Copernicus Programme spotted flames at a latitude of 72.723°N – an area once considered immune to such high temperatures.

On June 20, the small northern town of Verkhoyansk, home to just 1,000 people, saw a record temperature of 38 degrees Celsius. In the winter, temperatures in Verkhoyansk regularly dip below -40.