Authorities say the twister cut a diagonal path through rural areas, which likely kept the death toll from being higher. 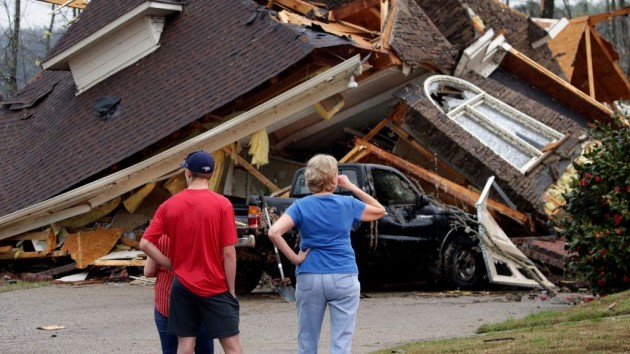 AT LEAST FIVE people are dead after a series of tornadoes hatched by early spring “super cell” storms tore across Alabama and moved into Georgia early today.

Authorities said one fierce tornado traveled roughly 100 miles across Alabama on Thursday, leaving a long path of damage, while in Georgia the National Weather Service for Atlanta said a “dangerous, fast moving” tornado ripped through some of the metro’s southern suburbs just after midnight.

The deaths were confirmed in Calhoun County, in east Alabama, where one of multiple twisters sprang from a “super cell” of storms that later moved into Georgia, said John De Block, a meteorologist with the National Weather Service in Birmingham.

Calhoun County Sheriff Matthew Wade said the twister cut a diagonal path across the county, striking mostly rural areas — something that likely kept the death toll from being higher.

“Five people lost their lives and for those families, it will never be the same,” Mr Wade said at an evening briefing.

“Our hearts, our thoughts and our prayers go to the families, and we are going to do our best to let them know we love them.” 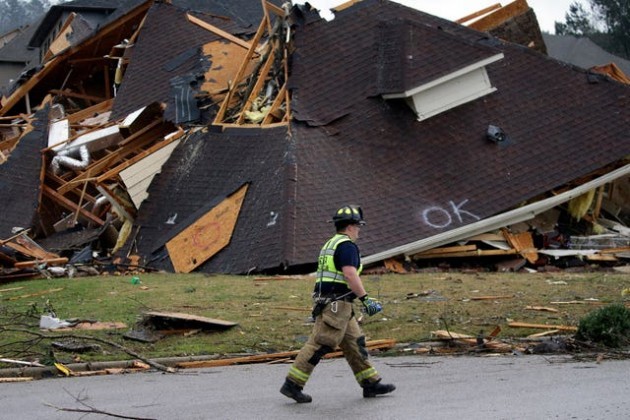 he US National Weather Service has issued multiple tornado warnings for Alabama and surrounding states.

Civilian drone footage posted on social media showed rooftops cleaved away from stately homes, the winds destroying some while leaving others untouched.

With power knocked out to tens of thousands and people now tasked with clearing away the debris and rebuilding, the violent weather that swept parts of the region marked the most dreaded part of springtime in the Deep South: tornado season.

While Alabama appeared to bear the brunt of Thursday’s tornado outbreak, forecasters warned of dangerous thunderstorms, flash floods and possible twisters from eastern Mississippi into western Georgia, and northward into Tennessee and Kentucky.

Flash flood warnings and watches extended to the western Carolinas during the night hours.