The state of Victoria has imposed one of the harshest lockdowns seen anywhere in the world during the Covid-19 pandemic. It’s provided an insight into what some leaders might get away with in the future. 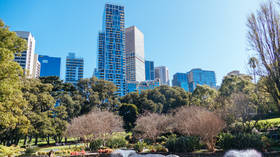 Winston Churchill once said, “Never let a good crisis go to waste.” Politicians the world over are adept at following this motto. Within days of the 9/11 terrorist attacks, the US Congress overwhelmingly passed the Authorization for Use of Military Force (AUMF) joint resolution which gave

President Bush powers to invade Afghanistan and was later used by President Obama to justify US military action further afield in Libya and Syria. Only one legislator voted against the resolution in 2001.

Once sweeping powers are bestowed upon a leader, rolling them back is a harder job. The coronavirus pandemic took the world by surprise. Indeed, 12 months ago, no one could have imagined the events that would transpire throughout 2020. The pandemic has reportedly caused over 850,000 deaths worldwide with an overall fatality rate of approximately one percent according to The Lancet. (In comparison, seasonal flu kills 0.1 percent of those it infects and the SARS outbreaks between 2002 and 2004 had a mortality rate of 10 percent).

Whereas children and healthy adults who catch the virus typically suffer a mild or even asymptomatic illness, those in their mid-70s or older have over a 10 percent chance of death. Younger individuals with underlying health problems are also at greater risk. In the UK, of the roughly 40,000 deaths attributed to coronavirus, approximately 20,000 have been care home residents.

Australia, a country with a population of 25 million, has been far less affected by coronavirus, having reported around 770 deaths to date. Despite this, the lockdown measures, particularly those currently operating in Melbourne, Victoria – which has seen the majority of the country’s deaths and where 96 percent have occurred in those over the age of 40 – have been far stricter in comparison to other nations.

The Victorian state government further tightened restrictions in early August. There is now a curfew in place in Melbourne between 8pm and 5am, with the only exceptions being “work, medical care and caregiving.” (This will be loosened slightly from 9pm to 5am from September 14).

Those Melbourne workers who are allowed to leave their homes during the day must be in possession of a work permit, which they must display if challenged by police or else risk fines exceeding a thousand dollars. (Police have thus far reportedly given out $2.9 million (AUD) in fines for breaching the curfew). Police are also permitted to enter a residence without a warrant. Drones and military forces are used to ensure there are no restriction breaches.

A few days ago, a pregnant woman was arrested and handcuffed at home in her pyjamas and in view of her children for alleged ‘incitement’ after endorsing an anti-lockdown protest on Facebook, a move that was swiftly criticised by the professional body that represents Victorian barristers as “disproportionate” to the threat she presented.

In the early hours of September 2, Victoria’s Upper House voted to extend the state of emergency by a further six months when current emergency powers expire later this month. (The State government had initially requested a 12-month extension). However, the bill only narrowly passed, 20 votes to 19, and was supported by the Green Party’s sole representative.

Australia has never been an occupied nation since colonisation. Those who have elsewhere lived under a totalitarian system of one kind or another know the warning signs. A close relative of mine living in Melbourne recently wrote to me, “I speak with many people from Eastern Europe, mainly Polish people who in 1981 escaped [totalitarianism]. They chose a place as far away as they could and for many, Australia was the place.

“Today, these people are shocked that the same dictatorial powers from which they escaped would catch up with them 39 years later in Victoria. Under martial law [in Poland]you could move and do things you wanted outside the police hour. You could go to a park and sit on a bench, go for a walk, or travel across the country. Victoria suspended democratic rules and is being ruled by decrees with draconian penalties.”

Yes, coronavirus can pose a serious, even life-threatening risk to elderly individuals and those with certain underlying health problems. Indeed, certain restrictions, as implemented in other countries, may be necessary to limit the spread of the virus throughout the state of Victoria. However, there is a point at which the cure is worse than the disease and one must start to question the blanket nature of the lockdown, why it is not targeted towards protecting those groups vulnerable to the virus or why local targeted lockdowns are not being used.

Statistical models predict the lockdown could generate more than 7,000 additional suicides over the next five years across Australia. This does not consider the economic costs to the state of Victoria and the country at large (now in recession for the first time in almost 30 years) brought on by businesses collapsing and unemployment rising due to the economic shutdown.

As a medical doctor, I take issue with aspects of the anti-lockdown protests or some of the groups that comprise this movement. But as a former Melbournian, what worries me more is the Victorian government’s response to dissent or how quickly some groups are to dismiss those raising concerns as conspiracy theorists, crackpots or somehow defective. Demonisation tends to lead to a hardening of views, be they right or wrong, and does not dispel incorrect viewpoints.

One piece of optimistic news is that Victorian Premier Dan Andrews declared on September 6 that some restrictions of the stage four lockdown could be gradually eased from mid-September onwards. Hopefully the slow but steady slide into autocracy seen in the land of fair dinkum – Aussie slang for speaking the truth – will now be curbed.

However, there is a risk that politicians the world over will see this as an example of how much people will tolerate and what governments can get away with. It may be a different country and a different crisis at some point in the future, but a precedent has been set.